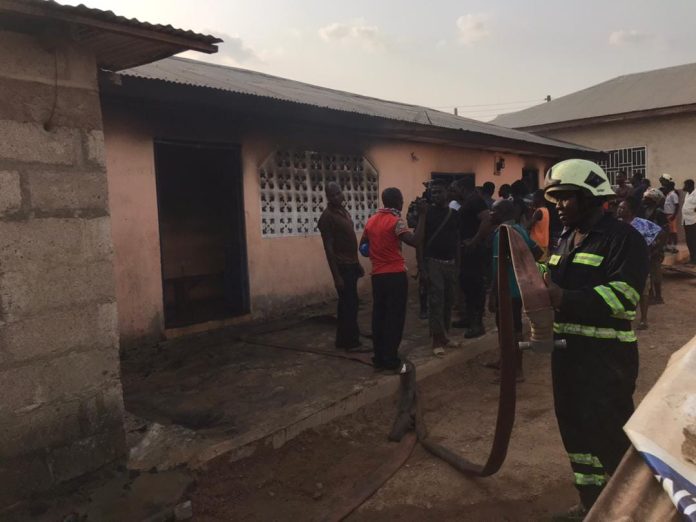 A fire has swept through a building in a poor neighbourhood in the Adansi North District, killing a nine-year-old boy, an official statement has confirmed on Friday.

An investigation has been launched into the fire that occurred on Wednesday, January 12, 2022, the latest in a string of domestic fires in the Ashanti Region that have killed at least three people, this year.

The Ghana National Fire Service said an engine was immediately dispatched to the scene at about 15:33 GMT, following a report by a resident. The fire which was met at an advanced stage and spreading in all directions in the four bedroom house located at Adansi Dompoase, was later brought under control at about an hour time.

The crew later discovered the charred body of the victim during an assessment of the extent of damage. His grandmother has since been invited for questioning after investigations reveal she had locked him up in one of the rooms as a form of punishment prior to the incident.

“The fire badly affected a Four (4) Bedroom Self-contained House numbered D/8B/M together with its entire contents including home appliances, personal effects, etc running into several thousands of cedis. However, One (1) minor believed to be a nine (9) year old boy died in the fire. The charred body of the deceased was however handed over to the Police at the scene for preservation and further investigation”, according to the statement from the Ghana National Fire Service.

“Eyewitness account suggests that this calamitous fire started in the room where the deceased who was in a state of delusion, stripped naked and locked up as a form of punishment, spread into other adjourning rooms and set ablaze. Meanwhile investigation is still underway to unravel the circumstances that brought about the fire”, the statement further added.

The incident has shocked residents in the area who have since been pondering over the development for the past days.

We didn’t intimidate any ethnic group in Banda – GAF