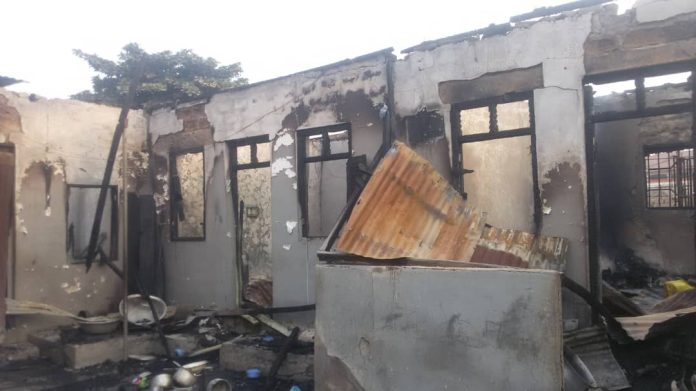 A man in his early 60s has died when fire swept through portions of a 14-bedroom house late Monday night.

The victim Akwasi Asare got trapped when the huge blaze engulfed the building located at Kronum in the Suame Municipality of the Ashanti Region, witnesses and local media had said.

Fire crew who were deployed to the scene to douse the blaze declared the situation was under control. The team who later discovered the charred body of the victim in one of the rooms after a thorough assessment in the building.

Assemblyman for the area Elvis Nyantakyi said: “It happened close to the Angel Factory. Nine pf the rooms were completely razed down. The victim who is on his sick bed got trapped in the blaze after all attempts to rescue him failed. His body has been deposited at the Komfo Anokye Teaching Hospital as we speak. His family has been to the police to officially report to them.”

Tenants and other family members were salvaging their wares when dailymailgh.com visited the scene on Tuesday morning. Items worth millions of Cedis have been destroyed by the fire.

The cause of the fire is yet to be established as officers at the scene were not ready for comments.

The charred body have been identified by the victim’s family which is engaging the police to uncover the circumstances surrounding the incident.

Fire incidents are very common in the Ashanti Region as some of the incidents result in the death of victims.

The Ghana National Fire Service says at least 60 fire outbreaks have been recorded in the Ashanti Region in the last 10 days of 2022.

The Service says it is rolling out strategies to sensitize the public to avert such disasters.

“With just ten days into the year and this is what we are faced with, it is nothing good to write home about. So as a command, we have designed a pragmatic approach with community engagement to ensure the fire incidents are reduced drastically”, said a spokesperson for the service in the Ashanti Region, DO III Peter Osei Addai.

He further courted the media to assist in the education to ensure collectively lives and properties are protected, especially during the Harmattan.

Pay us our salary arrears or we riot— Ghana’s Data Collectors...