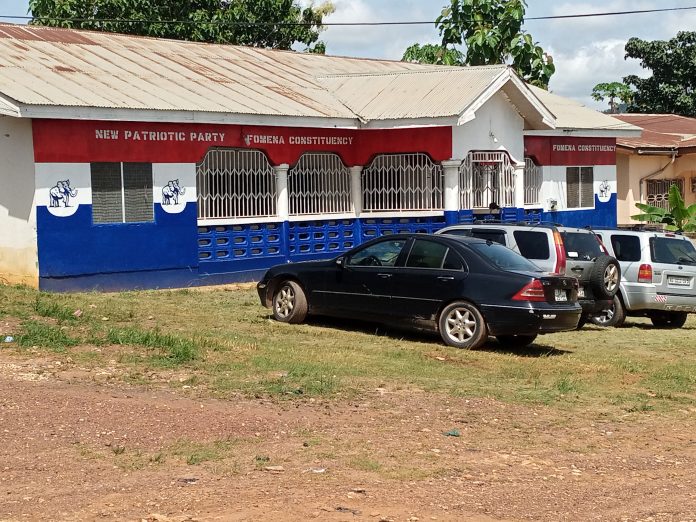 The governing New Patriotic Party has opened nominations in the Fomena Constituency to pick officers at the polling station level.

Scores of aspirants were at the party office Friday (22 April 2022) to get copies of the nomination forms ahead of the polls. The party has dispatched officials to supervise the elections.

Hon. Kwabena Kokofu and Mr. Dennis Santiago have been appointed to oversee the conduct of the elections of polling stations and electoral area coordinators’ elections. The closing of the nomination will end on Saturday (23 April 2022). The election of polling station executives is expected to be held on April 26, while electoral area coordinators’ will be held on April 29.

Some of the aspirants had thronged the party office early in the morning but could not meet the delegation led by a former Bantama MP.

They alleged that the forms had been issued to supporters of the incumbent MP, Andrew Amoako Asiamah, who they accuse of scheming with top party officials to bend the electoral rules.

The team however arrived at the party office after midday and were about to meet constituency executives, reports Asaase Radio.

Constituency Chairman Alhaji Kareem had told the Accra-based FM station that “some of the aspirants were here very early in the morning but they have since left, we now have to call them to the party office to come and purchase the forms”.

“They just told me that they are in with the forms and the remaining forms will be picked for the process to start. We fear that we are now going to get our members…Even we have heard that the Deputy Speaker is already distributing the forms to his members and that is very disturbing”, he further alleged.

The party officials are currently in a meeting with constituency executives ahead of the electoral process.

Fomena is located in the Ashanti Region, the ruling party’s stronghold.

The protesters painted the party office with the traditional colours of the opposition NDC as they turned their anger on leadership at the regional and national levels.

A spokesperson for the aggrieved supporters of NPP in the Fomena Constituency, Emmanuel Domah, said their protest was a result of unfair treatment meted out to some party members by the party hierarchy.