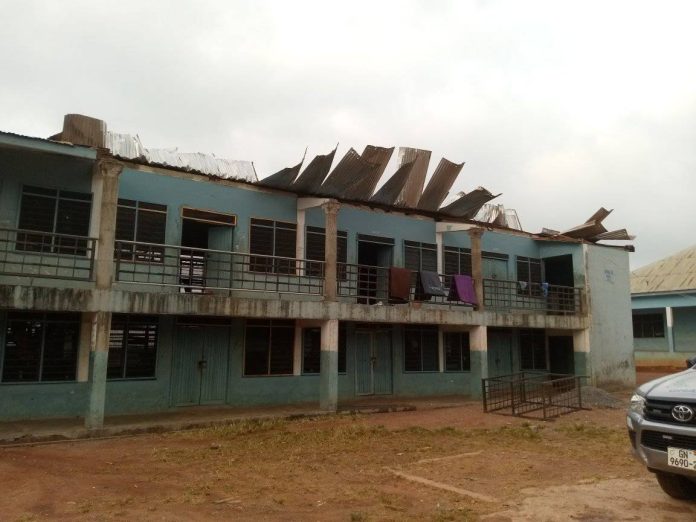 Heavy rains caused havoc at the Agona S.D.A Senior High School (AGASS) in the Sekyere South District of the Ashanti Region, ripping off roofs and destroying other properties.

The incident said to have occurred on Wednesday, 16 February, 2022, affected the main dinning hall as well as the old boys’ dormitory. 5 other reservoirs were also brought down by the heavy storms.

“It rained this evening around 7:30 pm for a very short period. The rains came with a very high storm. The storm has caused damage to some of our structures. Half of the roofing sheets of the old boy’s dormitory have been ripped off destroying some of the wires”, the headmaster of the school, Kingsley Ofori Gyimah said in a terse statement.

Images widely shared online show some damaged water tanks which had fallen off their platforms with one totally destroyed. Some electric poles at the boys’ dormitory have tilted as a result of the rain, exposing students and workers to danger.

At least 40 continuing students were affected. School authorities have already relocated them to safety, it is reported.

An administrator of the National Disaster Management Organization(NADMO) in the Ashanti Region, Nana Attakora Kodua says the damage would not warrant students to be put out of school, as efforts are underway to urgently see to the reconstruction of the destroyed structures.

“As NADMO our District Office has carried out the assessment and they have forwarded a report to the District Chief Executive. Some of the reports will be made available to the Regional Secretariat of NADMO for onward submission to the headquarters [in Accra]”, he told Accra-based Asaase Radio.

“The situation is not all that bad to warrant the closure of the school… Teaching and learning will continue as they await maintenance of the facilities that were affected”, he added.
No casualty or injury was recorded.