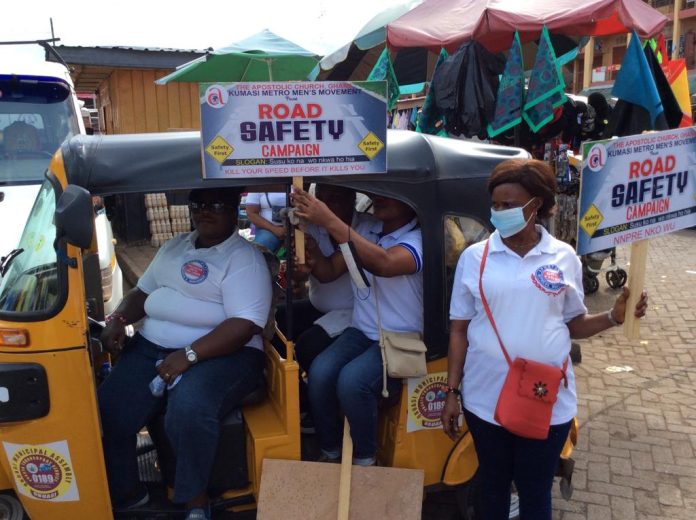 About 470 people were killed in 2,800 road crashes recorded in the Ashanti Region between January and October this year, the National Road Safety Authority (NRSA) has said.

The figure represents a 12 percent rise in mortalities over last year’s, according to Hajia Simbiat Wredu, a Regional Coordinator at the NRSA.

She was speaking at a road safety campaign program organized by the Obuasi Area Men’s Movement of the Apostolic Church -Ghana on Saturday, November 13.

“So far the accident situation in the Ashanti Region is not good… Statistics have shown that a lot of these crashes have been attributed to human errors. And so if we want to reduce this trend we should be able to advise drivers about safety on our roads”, Simbiat said as she commended the Apostolic Church for the initiative.

The NRSA has launched a ‘Stay Alive Road Safety Campaign’ earlier this month in Accra.

The campaign being the second phase of the “ARRIVE ALIVE” Road Safety Campaign’ launched this year, will enable the Authority, the Driver and Vehicle Lincensing Authority (DVLA) and the Motor Traffic and Transport Department (MTTD) to combine education, advocacy, training and enforcement to fight the menace of road crashes and casualties.

“We are also establishing a call center where a shortcode will be giving out to the public to report all infractions on our roads”, said Pearl Adusu Gyasi, a spokesperson for the NRSA.

“It is evidently clear that accidents are rampant in the nation…so we decided as part of our programme to campaign for road safety. Drivers on our roads are all men and therefore if we have to advise them then our expectations will be met and carnages on our roads will be reduced”, said Apostle Dr Samuel Tetteh Walker, a National Superintendent of the Men’s Movement for the Apostolic Church-Ghana.

The church also pledged to intensify the campaign to other areas ahead of the yuletide.