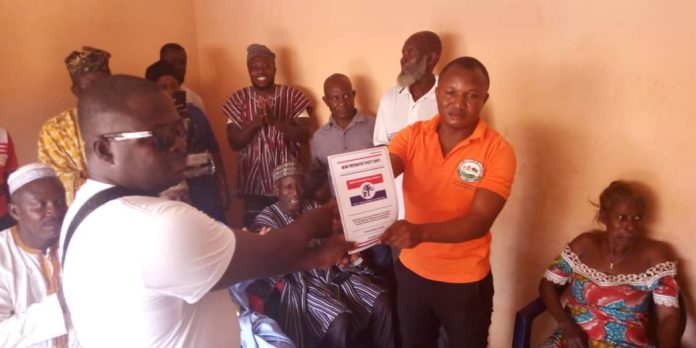 They presented a cheque of 2,000 cedis to the party’s Research And Elections Officer, Mohammed Alhassan at the constituency office at Hwidiem, on Saturday, July 20, 2019.

By picking the form, Mr Suraj, who describes himself as the man for the people is getting a step closer to unseat the incumbent NDC Member of Parliament, Collins Dauda.

NPP Ali, as he is affectionately called, however, has the next hurdle to cross which is to pay an amount of 20,000 cedis as filing fee.

Speaking on behalf of the group after receiving the forms, Abdulai Haadu, an opinion leader at Acherensua Zongo told DailyMailGH that the aspirant is the best candidate to lead the party into the 2020 parliamentary elections.

He touted the various support extended to them by the aspirants through various initiatives, adding that his members will go all out to campaign vigorously for him in the upcoming primaries.

“We know Ali Suraj. He is the grand hope of a renewed NPP popularity in the Zongos. He is the best architect to design and build a better, prosperous, fairer and a secured Asutifi South Constituency. He has everything. He is young, able, purposeful, of high integrity, personally attractive and modest. He is not an exhibitionist. He is sanely progressive and wisely cautious. With him on the ballot paper, Collins Dauda should be ready for him”, Haadu said.

He cautioned his followers not to repeat past experiences where unbridled competition in the parliamentary primaries of the party created divisions and unnecessary tension in the constituency.

COVID-19: Football’s Bubble, If It Ever Existed, Finally Pops