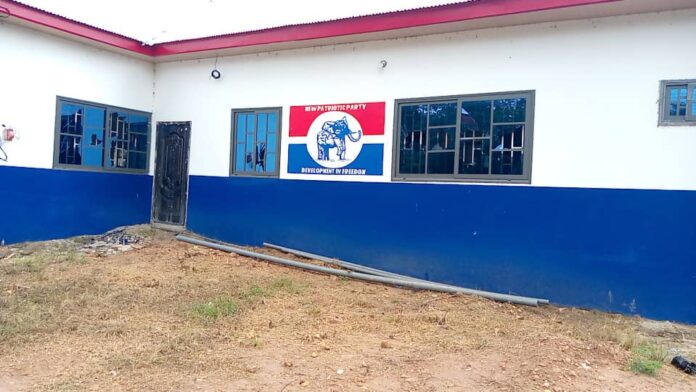 The constituency office of the New Patriotic Party at Nyinahin in the Atwima Mponua Constituency came under attack after irate youth destroyed properties running into hundreds of cedis.

Their action was in response to what they call a schemed attempt by the MP for the area, Isaac Kwame Asiamah to get the constituency chairman, Kofi Marfo nominated as District Chief Executive.

The last attempt to push for the removal of the current DCE, Hon William Yaw Nyarko was fiercely rejected by the youth during a meeting held by the lawmaker.

Friday’s attack at the party office heightened tensions in the area forcing police officers to rush to the scene to restore calm. Footage widely shared on social media saw badly damaged windows as the youth threatened to resist any attempts to impose on them a new DCE.

“We will strongly resist any attempts to impose the chairman on us. Asiamah’s actions will not auger well for the party and that’s what we are fighting against”, another said.

The party hierarchy has since condemned the actions of the youth and are calling on the police to get all perpetrators arrested.

“This indiscipline is cropping up and it is time we called these people to order…”, Kwabena Nsenkyire, a First Vice Regional Chairman of the NPP told Kumasi-based Akoma FM.

“The DCE has to come and disown them otherwise his renomination hangs in a balance”, he further disclosed.