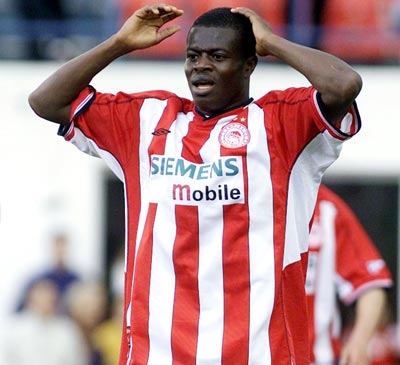 A mere minute after coming off the bench late in Barcelona’s visit to Inter Milan on Tuesday night, 17-year-old prodigy Ansu Fati — following a neat exchange with veteran Luis Suarez — shot himself into UEFA Champions League history in only his third appearance, simultaneously digging out the memory of another who, also at 17, set a record that would stand for over two decades.

For a little while, after Fati had lowered that bar for the competition’s youngest scorer by some 154 days, Peter Ofori-Quaye – a man forgotten even in his homeland — trended. The former Ghana international wasn’t exactly the Fati of his time, but his own prospects were bright enough to fill his countrymen with hope that he could become the nation’s next big forward.

At just 15, Ofori-Quaye secured a move to Europe from local side GHAPOHA, signing for Greek club Kalamata just around the time Ghana’s prime striker of that era, Anthony Yeboah, was making a name in England’s nascent Premier League. Joining him shortly thereafter in southern Greece were fellow Ghanaian teens Derek Boateng and Sam Johnson.

Two years later, Ofori-Quaye — still only 17 – earned a transfer to Greece’s most decorated outfit, Olympiacos, for a then club-record fee. Just before that summer switch, though, Ofori-Quaye had starred at the Fifa World Youth Championship where he scored twice, more memorably a ‘sudden-death’ winner against Japan in extra-time that got Ghana into the semi-finals en route to a subsequent fourth place finish.

Given that tournament — hosted by Malaysia — helped propel the likes of Thierry Henry, Nicolas Anelka, Juan Roman Riquelme, Pablo Aimar, Jamie Carragher, Michael Owen, and future Ghana skipper Stephen Appiah to greater heights, Ofori-Quaye had every chance of making it to the top, too. At Olympiacos, a club of such prestige, he may have found a solid platform from which to soar – or so it seemed.

To his credit, Ofori-Quaye did collect some scrapbook-worthy highlights, most notably the aforementioned record-setting strike against Rosenborg — a barely consolatory effort in a 5-1 thumping suffered by the Thrylos, really — and the two group games he enjoyed that season against eventual champions Real Madrid. Ofori-Quaye would also get two more goals in the Champions League during his six seasons in Piraeus, winning every domestic championship in that time, along with a Hellenic Cup triumph.

Then came 2003, when Olympiacos released Ofori-Quaye, and things quickly went downhill for a player who had already been part of two Nations Cup squads for Ghana. He became something of a weary wanderer, mixing periods of clublessness and unspectacular stints in Greece, Cyprus, and Israel with even less distinguished spells back home. It wasn’t all his fault, though, to be fair.

Ofori-Quaye may never have been a prolific goalscorer — his technique was more eye-catching, they say — but, like many gifted starlets who never got to fulfil their potential, what he struggled with most were persistent injuries and, now aged 39, his career is long over, reduced to the piece of trivia that Ofori-Quaye must have clung to for years like a dear souvenir — until last night when Fati knocked even that out of his embrace.

NPP understands difficulties of tertiary students and has better plans to...