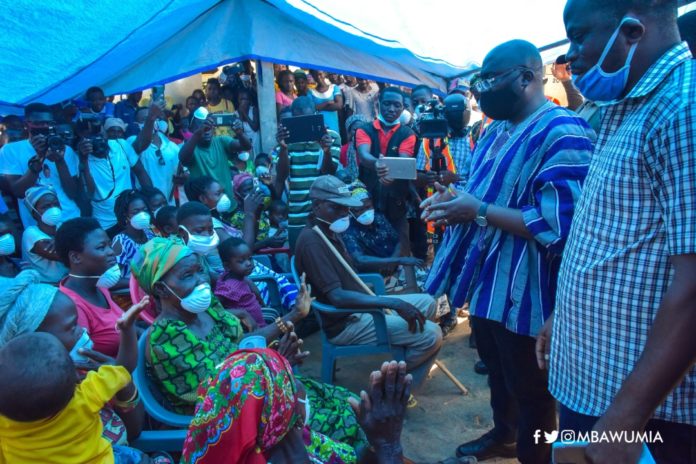 Vice President Dr Mahamudu Bawumia has cancelled his scheduled durbars with some prominent chiefs in the north in order to commiserate with flood victims of the north.

In view of the spillage of the Bagre Dam in neighbouring Burkina Fasa coupled with torrential rains, several persons have been displaced and hundreds of acres of farms submerged in water.

So far, 10 people have been killed up north by floods caused by the spillage and torrential rains. Some victims have been forced to seek temporal shelter in school buildings within the communities with roads leading to major town rendered inaccessible to motorist mostly within the North East and Upper East Regions.

Dr Bawumia who was speaking Bolgatanga-based URA radio, disclosed that there was the need to assess the situation and provide assistance to the displaced persons in the affected areas.

“I have cut short my durbars in some area and will need to go round and commiserate with the victims of the flooding. Government will also be looking at providing some relief items to them in order to ameliorate their plight. He disclosed.

According to him, the level of devastation is disheartening indicating that the perennial flooding will be a thing of the past upon the completion of the $1 billion multi-purpose Pwalugu Dam.

“At the end of the day, this is a problem that we have kept experiencing year after year and the question I am sure is in the minds of every Ghanaian is what are we doing about it?

“We have basically understood that to deal with this problem fundamentally, we have to have a flood control in the context of the Pawlugu Dam.

“That is the most important antidote to all of these.

That is why we have moved to secure the Pawlugu Dam project, and this project is the biggest dam project we have in the northern region”, he said.

He said the dam is “the single biggest investment in northern Ghana since independence”.

“It is about $1 billion dollars and the contractors are on site”, he noted.

GIVING BACK: Could We All Just Spread Some Love?

Medeama Believe Their Time Is Now — And Why Not?

Chief slaps and tears uniform of cop at Police Station