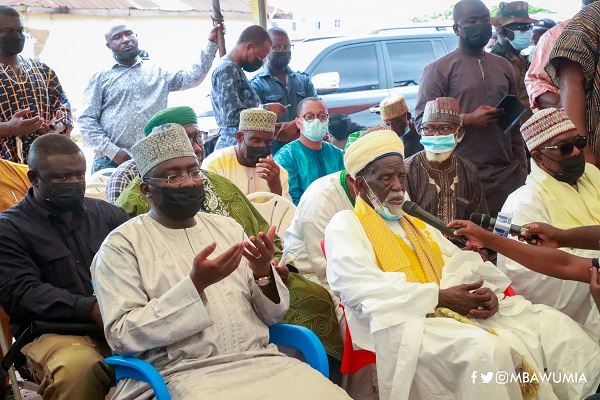 Ejura town has been in the news all-week for the wrong reasons, following the mysterious death of Ibrahim Mohammed, alias Kaaka of and two others, Abdul Nasir Yussif and Murtala Mohammed,  who also died during a youth march to protest Kaaka’s death.

On Friday, Dr. Bawumia led a delegation, which included the National Chief Imam to Ejura to commisserate with the bereaved families.

After calling on the bereaved families and visiting the injured, the Vice President, the National Chief Imam and other Muslim members of the delegation joined the Zongo community in Ejura to observe Jummah prayers at the Ejura Central Mosque.

The National Chief Imam, who led prayers at the packed mosque, delivered a sermon on appreciation of Allah’s grace and eschewing jealousy.

After the main prayers were said, Sheikh Sharubutu led the congregation to say special prayers for the three who lost their lives and asked Allah to extend His mercy on them.

Following a directive by President Akufo-Addo, the Minister of Interior, Ambrose Dery has set up a three-member  committee to investigate circumstances which led to the death of the three.

Commiserating with the family

Bawumia has led a government delegation to Ejura in the Ashanti Region to commisserate with families of the three people who died in Ejura earlier this week.

The three, Ibrahim Mohammed alias Kaaka, died in hospital under mysterious circumstances, while the other two, Abdul Nasir Yussif and Murtala Mohammed died during a protest by the youth of the town following the death of Kaaka.

The Vice President’s visit on Friday, followed an earlier one on Thursday by the Minister for Interior, Ambrose Dery.

At the bereaved families, Ashanti Regional Minister, Simon Osei Mensah, who spoke on behalf of the Vice President, commiserated with the grieving families and assured them of government’s quest to investigate the  circumstances which led to the death of their loved ones for appropriate action to be taken.

Vice Preaident Bawumia donated 20,000 Cedis to each of the three bereaved families, and also gave each of the injured 10,000 Cedis.

Adeti’s Notebook: To those being sued by corrupt people