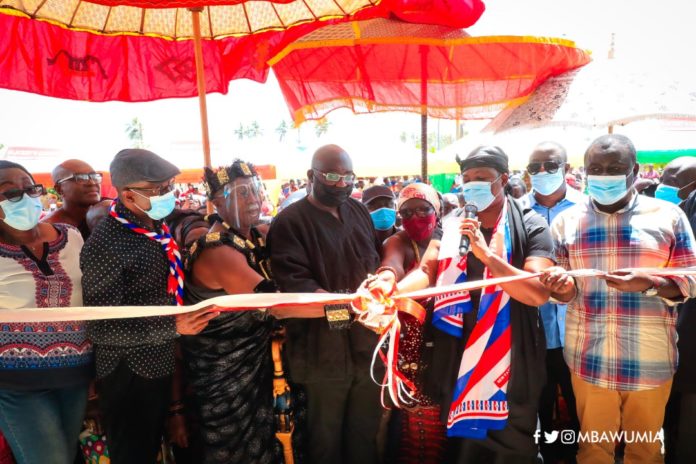 The Vice President, Dr Mahamadu Bawumia, has commissioned a Training Institute for staff of the Ghana Education Service, at Saltpond in the Mfantseman Municipal of the Central region.

Conceived by the Kufuor administration, construction works began in 2011 but were abandoned in 2012 by the Previous administration due to lack of funds. The project was resurrected in 2017 and taken up by the GETFUND through the efforts of the late MP for Mfantseman, Ekow Quansah Hayford.

Speaking at the commissioning on Friday, October 30, 2020, Vice President Bawumia said the completion and commissioning of the facility, which has 90 self-contained rooms, 2 large conference halls, training rooms and space to park 50 cars, is further concrete evidence of the Akufo-Addo administration’s commitment to the overall development of the education sector.

“Since we assumed office in 2017, the Nana Akufo-Addo government has pursued a ‘Teacher First’ policy, which has led to the implementation of policies and programmes geared towards continuous improvement in the numbers and quality of teachers and other stakeholders in education.

“We have taken concrete measures in the education sector. For instance, we have recruited 93, 274 new teachers since 2017, to clear the backlog of teachers who were qualified but not employed by the previous government.

“In the past, teachers taught for three, four years but were only paid three months of their accumulated salaries. We have cleared that arrears.

“We have restored Teacher, Nursing and Arabic Instructors training allowances cancelled by the previous government. We are building massive infrastructure across the country. And as indicated, we are ensuring the continuous professional training of teachers every year. We have also introduced a new and transparent policy for the promotion of teachers”.

The Vice President said all of these measures and more had led to Ghana being ranked number 2, behind China, in the league of nations to have improved teacher welfare the most in recent times.

“President Nana Akufo-Addo is determined to develop the human resource base of Ghana. But he cannot do that without the active participation and input of teachers, hence the priority he has placed on teacher development and welfare. I can assure you many plans in the works to make the education sector even more vibrant,” he indicated.

NDC to expand water, electricity for All – Asiedu Nketia