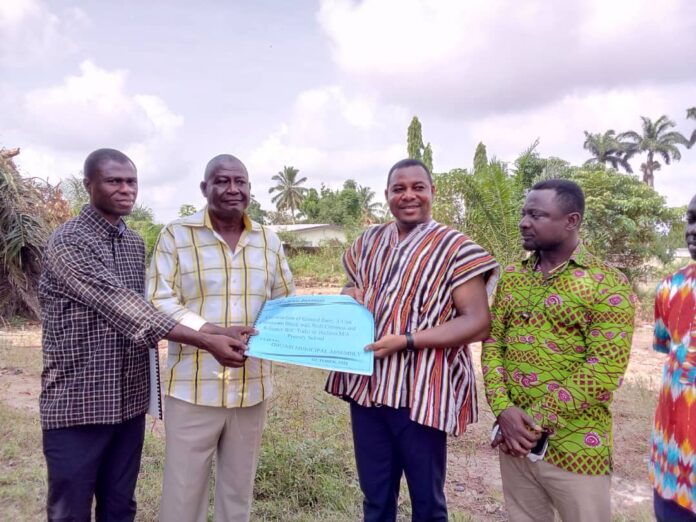 The Obuasi Municipal Assembly led by the Municipal Chief Executive Honorable Elijah Adansi- Bonah has cut sod for the construction of a 6- unit classroom storey block for the Bidieso Primary school.

This is the first time the school is witnessing any new facility since it was established in 1955.

The project will initially kick off with the construction of a three (3) storey unit classroom block with an 8 seater water closet toilet facility and a Staff Common Room.

The second floor which will be the second phase will have another 3- unit classroom with the head teacher’s office, store room and six (6) seater water closets.

The MCE at a short ceremony to hand over the site to the contractor said the Assembly is fully aware of the infrastructural deficits in some schools in the Municipality and hence has committed resources to bridge those gaps.

“Since I assumed office in 2017, I have made it a personal commitment to ensure that we bridge the infrastructural gaps in schools in the Municipality. Currently, work is ongoing at New Nsuta School, Methodist school at Antoboase, Sanso KG and Bogobiri School. We have also completed school projects at Kokoteasua, Adaase, Salvation, and Presby School among others”

He said the Bidieso school project is financed through the DACF- Response Factor Grant and it is expected to be completed in six months.

He charged the contractor for the project UNICO Express to complete and handover the project in the stipulated time.

The Municipal Works Engineer David Agyei on his part tasked the school authorities to support the contractor during the construction phase. He pledged to supervise the project to ensure it meets the required standard.

The Headmistress of the Bidieso Primary school Helena Anquandah lauded the MCE for coming to their aid. She said the school has over the years struggled with classroom accommodation resulting in overcrowding in some classrooms.

She said “the decision to construct 3-unit classroom block for the school has come as a welcome relief to we the teachers and the students. We have had a dip in school enrolment due to inadequate classroom blocks”.

The Assembly member for Bidieso- Mangoase electoral area, Hon. Ishmael Yakubu Coffee also pledged his support to the contractor during construction. He appealed to the school authorities to take good care of the facility when completed.