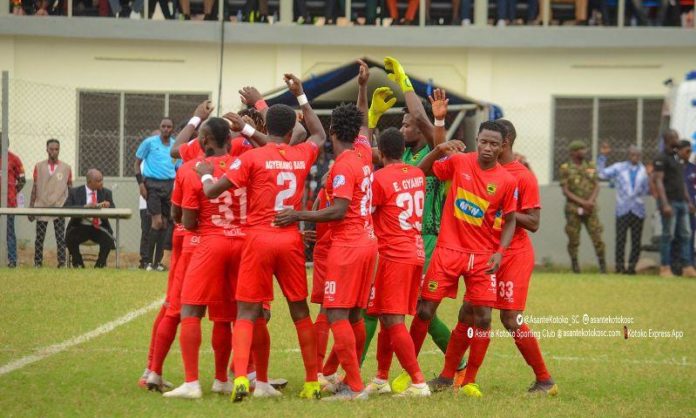 Not long after Asante Kotoko narrowly hurdled a FIFA-sanctioned transfer ban by clearing a long-standing six-figure debt owed Tunisian outfit Esperance, from the 2015 acquisition of striker Emmanuel Clottey, the Porcupine Warriors have walked right into another.

This freeze, though, hasn’t been imposed by any football governing body; it’s coming right from Manhyia Palace, the seat of Ashanti royal power from where Kotoko’s strings are pulled.

“Asantehene Otumfuo Osei Tutu II has directed that the club should not recruit any new player for at least a season,” Kofi Badu, the King’s chief of staff, stated sometime this week.

“The reason is to temporarily stop the player attrition rate and enable us to work with the current crop of players, who the Asantehene thinks have the quality to push the club to the top.”

Now, this makes me smile. Really, it does — especially as someone sympathetic to Kotoko’s cause. See, there are many things holding the club back from becoming the globally revered force it once was and could yet be, and an insatiable appetite for signing — and sacking — players is one. The last few years, since Dr. Kwame Kyei was first appointed Chairman, has triggered a worrying spike in turnover.

One website, Ghanasoccernet.com, estimates that the tally in said period adds up to 55 players — hardly the stuff of a club that has its bearings right — and, even worse, a member of Kotoko’s new nine-person board sent early signals that the incoming administration was also raring to load the wallet, head to the transfer market, and paint the town red some more.

“Football is about quality players and we will look around the country and beyond and get the best players for Kotoko,” Kwadwo Boateng Genfi, Board Chairman of the Ghana EXIM Bank, said in an interview with Kessben FM.

For one year, at least, the Asantehene — Kotoko’s Life Patron — has applied the brakes to Dr. Kyei’s spending machine, effectively ripping up ambitious recruitment plans like Genfi’s. The transfer ban isn’t everyone’s cup of tea, of course — not least head coach Maxwell Konadu who has hinted that he’d like to sneak in a signing or two if required and, most importantly, if permitted — but Manhyia ought to stay the course.

With a full house — and there are quite a few players returning from injury — Kotoko have a squad generally strong and deep enough to compete, even dominate, at least domestically. The lengthy COVID-19 break offers a window for the team to recharge its batteries, and rather than simply count the days until his employers can splurge again, Konadu should use this period to achieve the sort of consistency that skipper Felix Annan rightly believes is “good for team-building.”

Away from the pitch, Kotoko’s hierarchy must also make the most of this generously afforded break from business-as-usual, strategizing to plot a road-map that would deliver Manhyia’s order “to set up the Asante Kotoko SC academy and . . . to provide opportunities for the development of the youth.”

If this ban makes you sad, please wipe those tears with a big handkerchief — a red one, preferably — for this could be the best thing to have happened to Kotoko in years.

Resistance and collaboration: Asameni and the keys to Christiansborg Castle in...

COVID-19: Ghana’s female U17 and U20 teams to resume training