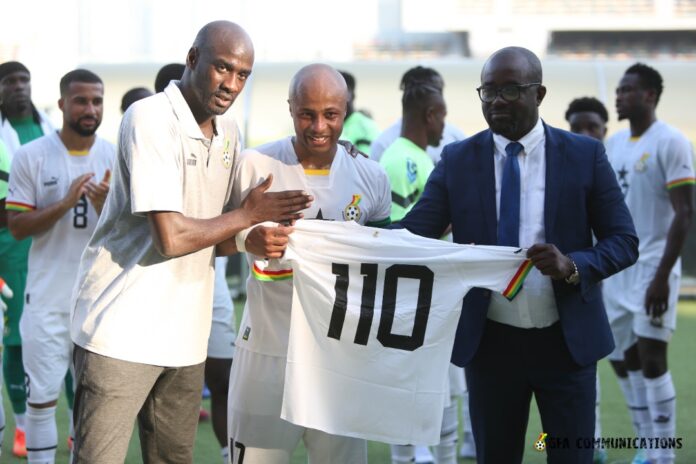 Ghana’s Black Stars captain Andre Ayew on Thursday, made history as Ghana’s player with most games for the Black Stars against Switzerland in Abu Dhabi in an international friendly game.

The former Olympic Marseille player led Ghana to a 2-0 win over Switzerland and played full throttle for the Black Stars team.

He beats Ghana’s all time top scorer Asamoah Gyan who made 109 appearances for the stars to become the most capped Ghana player and was presented with a commemorative jersey by President of the Ghana Football Association Kurt Edwin Simeon-Okraku at the end of the game.

Andre Ayew made his debut in August 2007 against Senegal in an International friendly and went on to win the World U-20 Championship in Egypt where Ghana beat Brazil in the final to win Africa’s first gold medal in the FIFA U-20 World Cup.

Andre Ayew has scored 23 goals in 110 appearances for Ghana – making him the seventh all-time top scorer of the Black Stars.

He’s expected to lead Ghana when they start their 2022 FIFA World Cup campaign with a game against European giant Portugal on November 24 at Stadium 974 in Doha.

Ksi: BoG driver charged with manslaughter over death of ‘girlfriend’