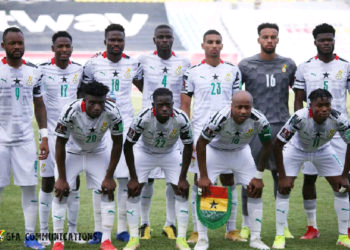 Ghana’s Black Stars are left with only 18 players in camp ahead of tomorrow’s crucial game against Japan in the four nations tournament.

The Black Stars team has been depleted after a host of them left the team’s training camp to return to their various base at club level.

According to the Ghana Football Association Communications Director Henry Twum Asante, the players currently at camp are just 18 as they kick-start the Kirin Four Nations tournament in Japan tomorrow at 9:55am against the hosts.

“We currently have 18 players in the Black Stars camp in Japan. There is no COVID-19 case in our camp as reported in the Media,”

“Gideon Mensah is not with the Black Stars team because of injury. He complained about injury after our game against CAR and the medical team decided to give him some time to rest knowing that he has also had a long season in France.

“Daniel Kofi Kyereh was getting calls from his agent even when the Black Stars team was in Cape Coast. The agent contacted the technical team and they decided to let him go to sort his transfer move out.

“Daniel Afriyie and Christopher Antwi Adjei joined the Black Stars camp on Wednesday and they both trained this morning with the team”, he told Oyerepa FM.

Bill and Melinda Gates break up after 27 years of marriage