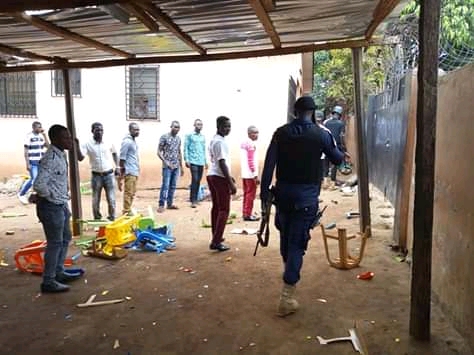 A gang of 50 attacked Q-Net, a marketing firm at Tako-Fiano in Techiman, the capital of the Bono East region, leaving one person unconscious, 38 others wounded and bolting with GH 16,000 on Wednesday.

The branch manager of Q-Net in Techiman, Abdul Mohammed confirmed to the press that one of his subordinates was narrowly knocked down by a motorbike rider, who has not been identified by the police yet, around their premises, which resulted in misunderstanding between his subordinate and the motorbike rider.

Mr. Mohammed said the motorbike rider slapped his subordinate. But regardless of whoever was at fault, he took the pains to go to the residence of the motorbike rider and apologised to him. However, he was not only driven away by the man and his family, but given sound beatings.

According to Mohammed, as if that was not enough, a gang of 50 stormed their offices from nowhere and started beating them, smashing doors, chairs, windows, took GHC 16,000, laptops and other valuable items, and bolted.

“But for the intervention of some men from the Omanhene’s palace the damage would be more than this”, Mohammed added.

The police, who arrived later at the scene, conveyed the injured persons to the Techiman family Hospital, and hurriedly mounted a manhunt for the gang.