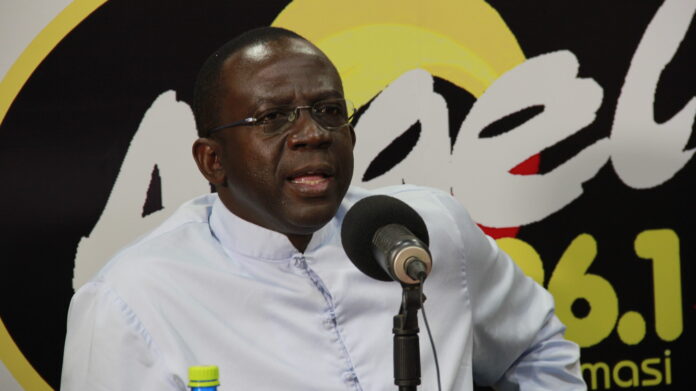 A former Managing Director of Bulk Oil Storage and Transport(BOST), Kwame Awuah-Darko has rubbished claims by the government suggesting that BOST incurred losses in profit during his regime.

Mr Edwin Provencal, the new Managing Director at BOST has alleged that as at January 2017, BOST had a backlog of unaudited accounts covering the period from 2014 to 2016.

Adding that, a Press encounter in 2015 which declared that BOST made profit on its operations by the then Managing Director was false and a calculated attempt to throw dust into the eyes of stakeholders as revealed per the audited accounts which showed a loss of GHS36.342 million.

Reacting to the statement, Mr Awuah-Darko at a media interaction on Monday, November 9, described the claim as false and palpable lie and called on Ghanaians and the media to treat it with all the contempt it deserves.

‘’I’m sure they are making all these claims because of the current state of corruption at BOST and TOR. Price Water Coopers, an Audit firm contracted by government to audit BOST presented a report that stated that we made profit. Would government say the firm did a bad job in their findings and report? If that is the case, then they should call for their arrest. Why would government deny a report that they paid huge amount to conduct? He queried.

Mr Awuah-Darko added: ‘’Looking at this report, one could clearly tell that all these claims are aimed at watering down the quality of progress TOR and BOST had made over the years, under my leadership, we made huge profit and that remains the fact. For a managing director, who is paid GHS100,000.00 per month from BOST in salary and allowances, you should be able to at least recognize’’.

The new BOST Managing Director should be the 1st to acknowledge that un-audited accounts do not mean that there are no accounts. In fact, the work of an auditor, is to audit the management accounts of a firm, and prove its accuracy or otherwise.

Our accounts for 2015 and 2016, were audited by the NPP Government, which findings were published in the State Enterprises Ownership Report 2017 by the Finance Ministry and the State Enterprises Commission, Page 45 shows the audited and recorded performance of BOST in 2015, 2016 and 2017. A little due diligence by Edwin Provencal, the 3rd MD of BOST in three years and his team would have revealed what was clearly an outstanding performance the board I left and management of BOST.

According to the latest BOST inventory report, it is obvious that claims made by the MD is false. As per the records below, the NDC led administration bequeathed to the current Government, a healthy balance of trade receivables of GHS 564 Million and product stock/inventory of GHS 762 Million and cash in the bank of GHS139 Million, a healthy total of GHS 1.5 Billion. Total obligations under BOST’s trading account to all our suppliers stood at GHS 1,4 Billion, leaving a healthy cash balance of over GHS 70 Million or USD 16.6 Million Dollars. Drawing GHS100,000.00 PER MONTH from BOST in salary and allowances, you should be able to at least recognize these numbers in note 16, 17 and 18 of the 2016 Audited accounts of BOST, as signed by Board Chairman, Mr. Ekow Hackman.

These reports confirm that BOST made profit, so why this sudden turn around to score cheap political points.? He however advised Government and party communicators to desist from spreading falsehood.

Meanwhile, workers of the Tema Oil Refinery (TOR) have given President Akufo-Addo a one-week ultimatum to dissolve the board of the company.

The staff say the board must be dissolved over its incompetent management of the refinery.

The workers made the demand when they staged a peaceful protest on Wednesday [November 4, 2020] morning at the company’s premises.

Among other things, the workers say the board has made no significant contribution to the growth of the company.