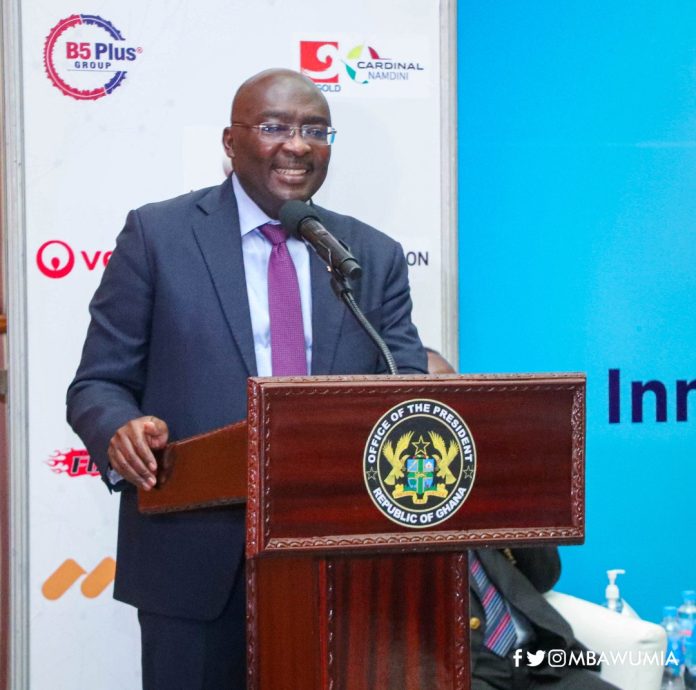 African Central Banks have been urged to partner with the mining sector and build up their gold reserves in order to withstand the headwinds buffeting their economies in the wake of the Covid 19 pandemic and the Russia-Ukraine conflict.

Vice President Mahamudu Bawumia, who made the call on Wednesday, 1st June 2022, said the aftermath of these two challenges will result in a redefinition of the global economic architecture due to disruptions in supply chains and drastically reduced access to essential items.

This calls for greater self-reliance, from producing own medicines to enhancing agriculture production. But the greatest emphasis should be on building up their gold reserves in order to protect the value of their currencies and provide balance of payment support, Dr Bawumia stated.

Addressing participants at the opening session of the three-day West African Mining and Power Exhibition and Conference (WAMPOC/WAMPEX) in Accra, Dr Bawumia bemoaned the fact that despite an endowment of several different minerals, and a long history of mining, African countries have very little in terms of reserves and their currencies have little solid backing to ensure stability.

“And that situation was very much the case for many of the African countries in terms of the large gold producers. If you look at the highest gold reserves in the world, for example, in terms of the Central Bank Holdings, the United States has about over 8000 tonnes, Canada, Germany and so on about 2000 tonnes. In Ghana, our reserves were 8.7 tonnes, as a major gold producer. And this is the case when I thought South Africa will be even much more significant, but it wasn’t much more significant and I was a bit surprised about that.

“I mean we’ve been mining for over 100 years and one would have thought that at least our gold reserves would be much more significant because of the role the gold reserves play in stabilizing currencies and providing balance of payment support.”

Vice President Bawumia emphasised that not only do African countries need to brace for the coming storm, but they will have to take proactive steps to become more self-reliant.

“Covid came and we were left exposed in Africa because we didn’t have manufacturing capacity for vaccines and we were dependent on the generosity of others. So we’ve started to try to produce our own vaccines now and our reliance on many other places for agriculture in terms of food has exposed us. So we’re going to have to really focus on agriculture and many other areas.

“I’m saying this because a new architecture would emerge and we have to be ready to play the game in that new architecture. But it will require that our central banks also have sufficient reserves of foreign exchange to be able to weather the balance of payment crisis that will come from time to time inevitably.
African central banks in gold and other mineral producing countries should actively build up their gold reserves by purchasing traceable and sustainably locally produced gold at world market prices.”

Local Gold Purchases
He commended the Bank of Ghana for implementing the policy of buying locally-produced gold to build up our reserves, and challenged other African central banks in similar gold mining countries to design and implement a clear policy towards local gold purchases “because it strengthens our economies, it strengthens our reserves. This strategy should not only be applicable to gold, but other minerals as well. Ghana’s recent discovery of lithium in commercial quantities should be leveraged to create battery manufacturing and building an EV market here. And we should be in that business so that we see the entire value chain operating here in Ghana.”

Reiterating the need for African countries to seek home-grown challenges to address the impending challenges, Dr Bawumia emphasised: “There’s a lot of opportunity for us to get ready. We need to think a little bit outside the box given what is coming, the new horizon. And I believe that we can partner with the gold mining companies who are here to enable us to achieve these objectives.”