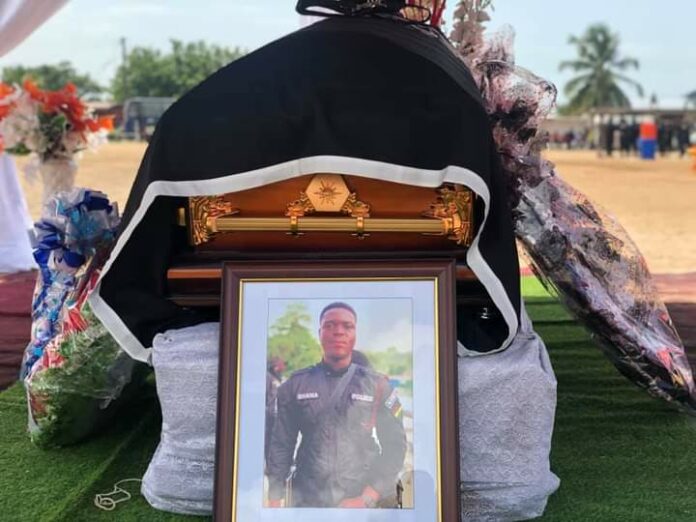 Family, friends and sympathizers on Saturday, thronged the Gomoa Nyanyano Kakraba School Park in the Central Region to bid farewell to slain Police Constable Emmanuel Osei, who was killed during a bullion van gun attack at Jamestown in Accra.

A government delegation led by Interior Minister Ambrose Dery was also present to observe the funeral service and mourn with the bereaved family. Personnel from the Ghana Police Service led by Director-General of Welfare, COP Maame Yaa Tiwaa Addo-Danquah were also present.

Many could not hold back their tears when the remains of the slain officer was carried by pallbearers. Her mum was spotted weeping uncontrollably showing signs she may have lost a treasure.

“Today is a very sad day for us”, one of the late Constable’s friend who is also a policeman said. “A huge vacuum has been created in our hearts”.

‘He was a patriot and a hero’

The police administration has since promoted the posthumously the late Constable to the post of Lance Corporal, describing the decision as well deserved, since Emmanuel was killed in line of duty.

Interior Minister Ambrose Dery who spoke on behalf of government described the late officer as a “patriot and a “hero”.

He assured that perpetrators of the heinous crime will be arrested to face justice. Mr Dery reiterated the government’s commitment to resource the security agencies across the country.

“We will also ensure that banks provide the needed protection for police officers who follow bullion vans”, he added.

The death of the policeman and female trader shocked the entire country after they were shot during a robbery attack on a bullion van early last month.

The armed men who were on a motorcycle reportedly bolted with the officer’s service rifle and an unspecified amount of money.

A number of arrests had been made after the Inspector General of Police put a ¢20,000 bounty on the killers of the officer and the civilian.