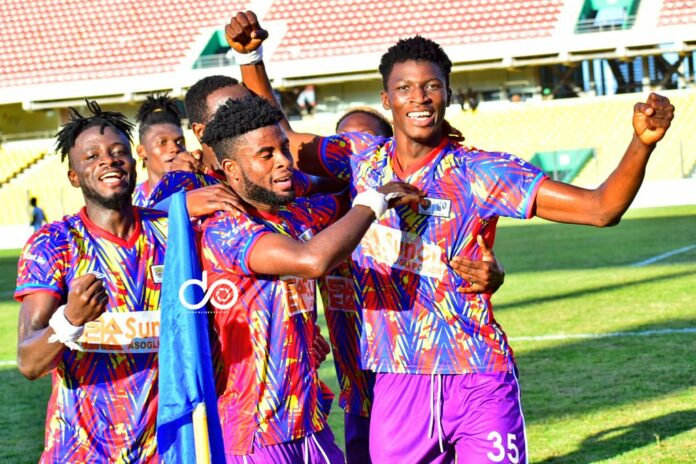 Super-Subs Kofi Kordzi and youngster Salim Adams sent Hearts of Oak SC through to the next round of the 2021-22 CAF Champions League preliminary round.

The Rainbow Boys are one step away from making it to the group stage of the CAF Champions League after seing off their Guinean counterparts.

The 2020-21 Ghana Premier League Champions inflicted defeat on Guinean club CI Kamsar in the preliminary round of the Caf Champions League at the Accra Sports Stadium on Sunday thanks to two second half goals.

In the first half of the match, the home team were the better side as they had some few openings but the two strikers, Daniel Afriyie Barnieh and Isaac were Mensah failed to do something useful with the chances.

Hearts pushed former Kotoko captain Amos Frimpong and his colleagues back in the game as they controlled the game.

Hearts were looking for a penalty to be awarded them after 28 minutes but rppeferee Patrick Tanguy J. Philippe Vlei from Cote D’Ivoire ignored the appeal by the Phobians.

Two late goals from substitutes Kofi Kodzi and Salim Adams changed the story after a difficult start for the Phobians to seal qualification into the next round of the competition.

The Phobians scored twice with one coming in each half of the game but they were ruled out by the referee.

Substitute Kordzi finally broke the deadlock of the match to put the hosts in the lead on the 83rd minute mark through a sumptuous free-kick from the edge of the box.

Deep in additional time, youngster Salim Adams who came on late in the match scored a scorcher of a goal to make it 2-0 at the end of the game.

The Phobians will now face Wydad Athletic Club from Morocco in the next round of the competition.