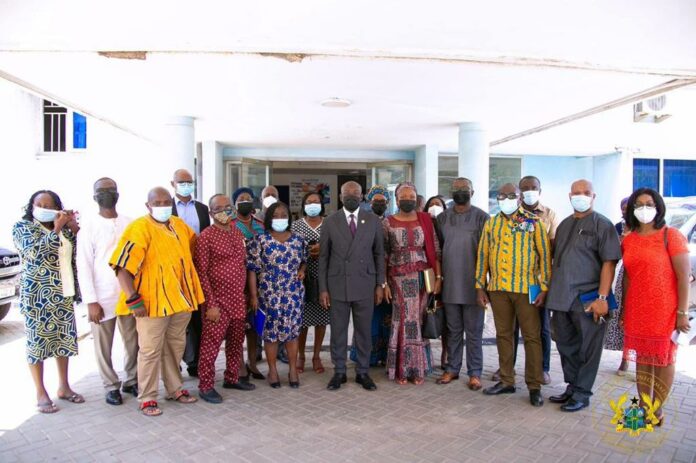 Minister for Information, Kojo Oppong Nkrumah is challenging the Ghana News Agency to establish a unique role for itself in the Ghanaian media landscape in order to remain relevant as government’s official news agency.

He made this call on Monday April 26, 2021 when he paid a visit to the agency as part of a routine tour of relevant agencies and media outlets under his Ministry amid ongoing discussions to restructure state owned media houses and make them viable players in the industry.

“When Kwame Nkrumah envisioned GNA, the media landscape in Ghana and across the world was not like it is today. Today, we have pluralism in the industry, we have multiplicity of platforms across the country, over about 500 radio stations, over 100 television platforms, several online and print platforms.

“And so the old market place in which the services of a bulk distributor of news coming from a government’s news agency, is no longer applicable. This means the GNA has to adapt to the changes in the market and ensure that you maintain your relevance,” he said.

In doing so, the Minister charged the agency to explore gaps in the media market place particular underserved areas and employ strategies to capture these areas.

He also noted budgetary and logistical constraints faced by the agency and pledged his support and that of the Ministry to step up GNA’s budgetary allocation and support it logistically to improve its operations.

Also present at the tour was the Deputy Minister Nominee for Information, Fatimatu Abubakar, Chairperson of the Parliamentary Select Committee on Communication, Cynthia Morrison, the Ranking Member of the Committee, Alhassan Bashir Alhassan Fuseini, Chairperson of the GNA board Prof. Olivia Kwapong, General Manager of the GNA, Albert Kofi Owusu, Chairman of the National Media Commission, Yaw Boadu-Ayeboafoh and other members of the agency’s board.

On her part, Prof. Kwapong acknowledged the significant increase in GNA’s budgetary allocation under the watch of the current Minister but bemoaned the persisting logistical constraints the agency faces. She said though the current administration has supported GNA, more has to be done in retooling the agency to become the bulk distributer of government’s news.

Mr. Boadu-Ayeboafoh called for close collaboration between the NMC and the GNA stressing that working together is the only way both entities can improve the media space. He also called for ethical journalistic practice and admonished the GNA to be professional in their day to day news reporting.

Sandema SHTS closed down as student dies in riot