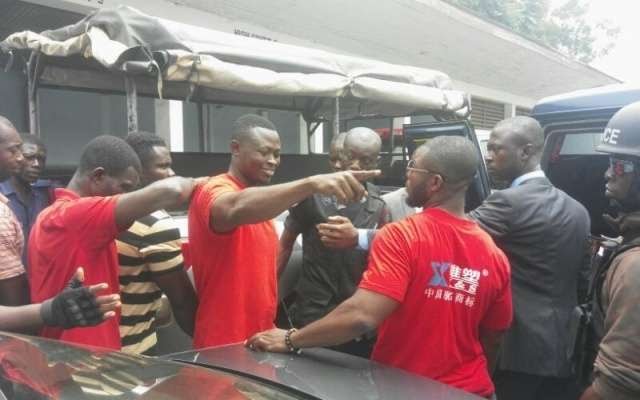 Fresh details have emerged about how a Security Coordinator in the Ashanti Region DCOP (Rtd) Kwaku Ayesu Opare Addo was allegedly attacked in his office by operatives of the National Security in an effort to remove him.

The retired police officer broke his silence on the issue in a radio interview, barely 24 hours after the incident which occured at the Ashanti Regional Coordinating Council on Tuesday, May 11, 2021.

In the 10 minute 5 second interview on Kumasi-based Akoma FM, monitored by dailymailgh.com, the retired policeman disclosed that the men claimed to be working under the orders of top security chiefs to take him to the National Secretariat in Accra.

In that interview, Mr Opare Addo mentioned a rank of an Operations Commander at the National Security Secretariat but refused to name the person holding that post. At a point he also mentioned the Acting National Security Coordinator as the one who ordered the men to conduct the operation.

“They just entered my office and told me that I am to follow them to the Accra under the orders of the Operations Commander but I refused do so. Suddenly, I saw myself being handcuffed. According to them, they have been asked to bring me to Accra because my tenure [as security coordinator] has ended but I have refused to handover”, he told the host Kofi Asante Ennin on Wednesday.

“I had been asked to leave post but the approach is procedurally wrong. I haven’t received any official letter to that effect. I have to handover officially to my successor before I leave office”, he further explained to the host.

He pointed out to the host that he had discussed his fate with the President who had “instructed me to be at post and that I would hear from him in due course until this unfortunate incident had occured”.

“I know almost all these boys”, he said. These are all Kumasi boys, one of them is from Accra, at least I know four of them. They were working under me and I had to sack them over misconduct”, Mr Opare Addo said as he could not confirm or deny that the operatives were members of the Delta Force, a group affiliated to the ruling New Patriotic Party during the interview.

Feeling disappointed, Mr Opare Addo further said it took the intervention of the police to restore calm. There are reports that the seven people were later released after an initial arrest.

He told Akoma FM that he had been invited by the police to assist investigations.

In 2017, DCOP (Rtd) Opare Addo took over from Mr George Agyei who suffered similar attack while at post.

The Delta Force stormed the premises of the Ashanti Regional Coordinating Council, demanding the removal of Mr George Adjei.

The rowdy group destroyed some properties and forced the Security Coordinator out of his office.

Mr. George Adjei was appointed by President Akufo-Addo, but the group has indicated that they cannot work with him because he did not contribute to the party’s electoral success.

The Regional NPP security organizer, Kwadwo Bamba who led the angry group to the premises of the Council said “we cannot work with him, where was he when we were struggling for the party to come into power?”

They said they want one of their own to be named the Regional Security Coordinator.

The timely intervention of personnel from the Ghana Police Service saved Mr. Adjei from further attacks.

The police later arrested a number of them who were later discharged by a court.

Mini-market fire on campus is being investigated – KNUST