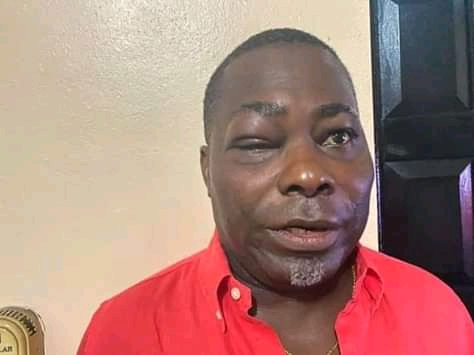 Widely shared photos of the swollen face of presidential staffer Charles Bissue have had Ghanaians talking.

Mr. Bissue is said to have engaged in a brawl with Tarkwa-Nsuaem MP George Mireku Duker.
The trending photos show Mr. Bissue in a red shirt as his eye is being forced open for examination by another person.

Per a Joy News report, the fight between the two governing New Patriotic Party (NPP) stalwarts occurred at the Kingston Hotel in Takoradi during a workshop for Regional executives and Parliamentary Candidates.

Mr. Mireku Duker and Charles Bissue have not been on good terms as sources say the latter’s alleged support for an independent candidate over the incumbent during the parliamentary primaries may have fueled the latest incident.

The report further indicates that during the meeting, there was a misunderstanding between the MP and the regional party executive.

Eyewitnesses say Mr. Bissue who is also the Regional Secretary for the Party, amid the confusion grabbed the hands of Mr. Duker and bit it several times causing the MP to bleed profusely.

The development is believed to have led to the exchange of punches between the duo.
Although Mr. Bissue had refused to talk to journalists about the fight, the MP has confirmed the incident.

He is said to be nursing some wounds at the hospital following a finger injury, media reports say.

The Western Regional sect of the party is expected to summon the two to resolve the matter.