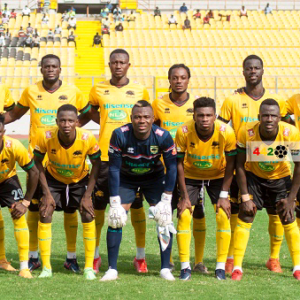 Kumasi Asante Kotoko SC picked a crucial and important point on the road against Chelsea in their Ghana Premier League week 13 clash at the Golden City Park in Berekum on Saturday afternoon.

Kotoko hhad a bad day at the office and had to rely on the exploits and heroics of young goalkeeper, Danlad Ibrahim to return to Kumasi.

The Porcupine Warriors shot stopper, Ibrahim Danlad saved a penalty kick in the game to prevent his team his team from suffering defeat on the road.

The Ghana U20 goalie heroics was a a key momentiin the encounter and was the Porcupine Warriors will be leaving Berekum with a point today.

The Bibires came into the second half with a real intention to win the match after a poor opening 45 minutes and almost shot themselves into the lead on the 60th minute but Kofi Owusu failed to connect to Jackson Owusu’s pass.

Chelsea came close to opening the scoring again but Evans Obeng failed to capitalize on the opportunity.

The Blue and Whites were warded a spot kick on the 77th minute but Stephen Anokye Badu’s effort was saved by Danlad Ibrahim to deny the home team the lead.

Kotoko, after Danlad’s save launched an attack of their own but Richmond Lamptey shot straight at the goalkeeper.

The game ended 0-0 after a pulsating and end-to-end game.

Mahama sold his integrity for 5m euros in Airbus scandal –...