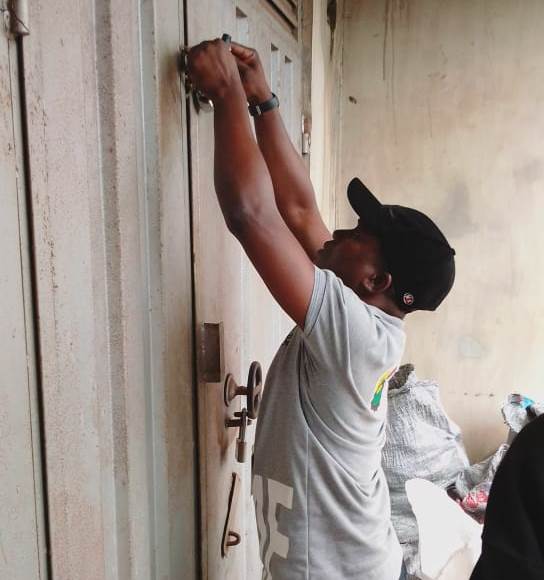 A Presidential Committee set up to clamp down on illicit businesses owned by foreigners in Ghana is in full force in Kumasi, the country’s second-largest city.

This comes barely a week after a similar exercise took place at Tiptoe Lane at Circle in the capital city, Accra amid resistance from some of the traders operating businesses without the requisite documents.

The operation on Tuesday, August 25 at the industrial enclave of Suame Magazine was, however, largely peaceful as the team went around the market to shut down the shops without resistance.

At least 40 shops were affected during the operation that was carried out after about two years of the grace period.

Secretary to the Committee on Foreigners in Retail Trade, Maxwell Apenkro said: “We came to see if after two years they have been able to comply with the rules. The previous one, none of them met the requirement fully.”

“Within the two year period, we expected that by now they should have regularised their business operations”, he added.

The team comprising representatives of the Ghana Revenue Authority, Trade and Industry Ministry, Ghana Investment Promotion Centre (GIPC), officers from the Ghana Immigration Service and Ghana Police Service moved into the enclave to check the documentation of the foreign traders.

The operation was also to enforce Section 27 (1) of the GIPC Act.

The exercise was largely peaceful as the team which went to parts of the market to enforce laws barring foreigners from engaging in retail trade succeeded in closing the shops without resistance.

Local traders at the Suame Industrial area have over the years protested against foreigners flouting Section 27(1) of the GIPC Act, which frowns on retail trade Ghana.

Mr. Apenkro now believes “locking will compel them [foreigners] to come to our offices to do the right thing.”

He added that the exercise also sought to educate foreigners on Ghana’s trade laws.