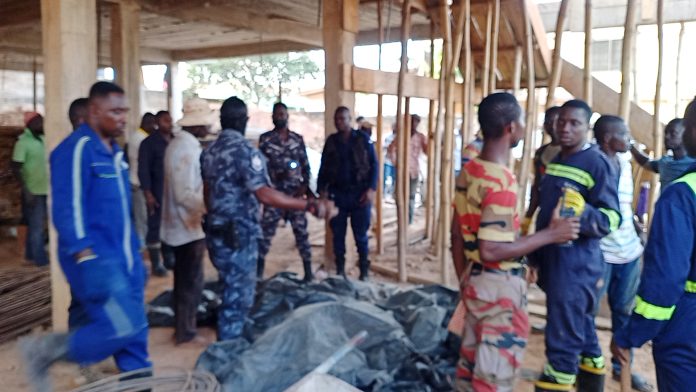 Two people have died while another is in critical condition after a wall collapsed on them at a construction site at Atasemanso-Konkromoase in Kumasi.

The unidentified male adults were erecting a retaining wall on Monday afternoon when the huge block crashed on them.

An emergency team from the police and fire service had rushed to the scene following a distress call.

They had pulled out the remains of the victims when dailymailgh.com visited the site.

The police confirmed the survivor was receiving treatment at the Komfo Anokye Teaching Hospital (KATH).

A fire officer said: “We had a distress call that some people got trapped in here… They were building the foundation of a wall and another wall caved in… The building is safe for now.”

“We have done a lot of investigations. The police have invited the contractor for questioning”, said the officer who identified himself as ADO II Osei Kofi.

The incident has left members of the community in shock.

The workers have been ordered to suspend operations at least for now.