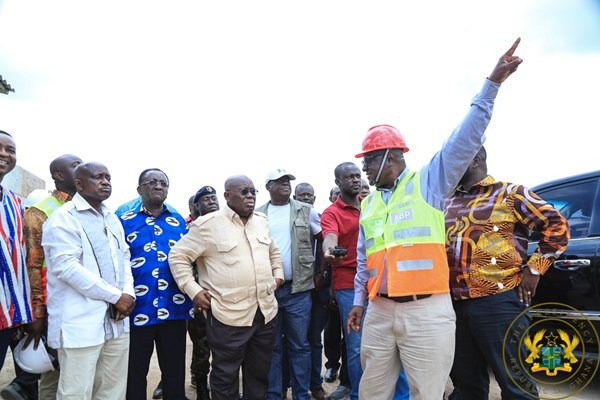 Ghanaian leader Nana Addo Dankwa Akufo-Addo, has tasked the various contractors working on the several road and infrastructural projects in the Kumasi Metropolis to ensure they are completed on time.

Visiting several project sites on Wednesday, 10th September, 2019, at the commencement of his 3-day tour of the Ashanti Region, President Akufo-Addo noted that the timely completion of these road projects will not only enhance the status of Kumasi as Ghana’s 2nd largest city, but also establish it as a major and strategic business destination in West Africa.

The President’s first port of call was at Atonsu, in the Asokwa constituency, where he inspected works on the Kumasi Drainage and Roads Extension Project.

The project, which is being undertaken by Chinese Company, China Henan International Co-operation Group (CHIGO), involves the lining of the Sissai River, for two kilometres, to reduce the incidence of flooding.
Additionally, critical bridges and footbridges over the Sissai river to connect communities along the river are also being constructed.

The project engineers also told President Akufo-Addo that the project will result in the construction of a two-by-two dual carriageway from the Coca Cola bottling plant to Dompoase junction to ease traffic on the Kumasi Lake Road.

At Onwe, in the Ejisu constituency, the President inspected ongoing emergency works for the replacement of a collapsed bridge over River Oda on the Ejisu-Onwe-Kuntenase Road.

It will be recalled that the bridge collapsed after a heavy downpour on 30th June, 2018, resulting in a certificate of emergency being issued to Messrs Kofi Job Ltd to construct the new bridge and approach roads. The project is expected to be completed in December 2019.

Also, at Ejisu, the contractor, Messrs JOSHOB limited, tasked with constructing a new round about assured the President that the project will be completed in November 2019. The project is part of the remodeling of four roundabouts, between Ejisu and KNUST, to help improve safety, and reduce the heavy congestion being experienced on the N6 highway.

President Akufo-Addo also inspected work on the Lake Side Road. According to the contractor on site, the project is expected to be completed by March 2020 for commissioning by the President.

The President also inspected works on the Aboabo to Airport Roundabout road, and interacted with residents of Asawase, where he assured them that the promises he made to them in the run up to the December 2016 elections, will be fulfilled before the 2020 elections.