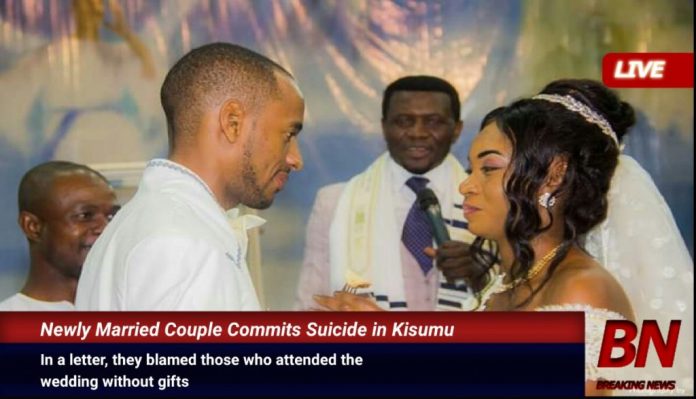 A couple has allegedly committed suicide four days after a lavish wedding due to a $78,000 (GHC430k, 000) debt incurred after the lavish wedding.

According to reports, Mr. & Mrs. Odipo left a suicide note that they were stressed and strained because the beautiful wedding they had, left them with the whopping debt.

In the letter, they also stated that they could not go to honeymoon as planned, Kenya Today reported, blaming those who attended their wedding of coming only to feast with no gifts. ”We are embarrassed & ashamed that we could not start our new life in happiness because you people did not make us happy as we expected, ” the letter reads.

A family member who spoke to The Daily Statesman said the wedding was held in a five-star hotel. She also revealed that 90% of those invited were special guests VVIPs and VIPs pointing out the two used to brag about how their guests will bring gifts in millions of cash. She also said 3 choppers were hired one for each family and another for the couple. A neighbor to the husband said he once told him during the wedding preparation that he will use all his savings to finance the wedding since his guests are millionaires who will each come with sh1.5 Million.

He added that those who attended the wedding only brought flowers and Best of Luck cards.

Investigate GETfund for causing financial loss to the state – ILAPI...

Executive Powers and Domestic Responses to the Coronavirus Pandemic – Is...

Mpohor MP the best; DCE not involved in galamsey – NPP...