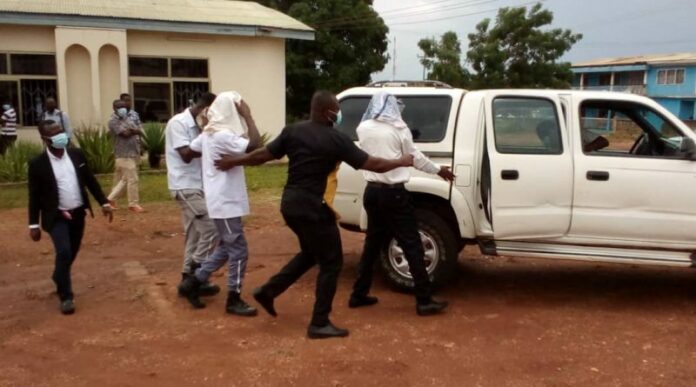 The Sunyani High Court 2 last Thursday granted a GH¢100,000 bail with two sureties to one of the six persons accused of the murder and secret burial of a 48-year-old charcoal burner, Abu Bukari Bahala, at Seikwa in the Tain District in the Bono Region.

The presiding judge, Justice Gabriel Mate-Teye, granted the bail application of the Manager of the Nkoranman Rural Bank, Mr Emmanuel Ofori, on health grounds but refused to grant the application for bail by counsels for the other five accused persons.

Three of the accused persons, who are police officers at the Seikwa Police Station, are Chief Inspector Eric Aforo, General Corporal William Apussung and General Constable Ebenezer Akuffo, while the remaining two, who are security men at the Nkoranman Rural Bank, are Rubin Obeng and Aaron Abbey.

All six have been charged with conspiracy to commit murder and murder.

In granting Ofori’s application for bail based on health grounds, the court stated that one of the two sureties should be a public servant and he (Ofori) should submit his passport to the registry of the court.
In addition, he was to report to the Criminal Investigations Department (CID) officer in charge of the case in Sunyani every Wednesday at 10 a.m.

The court also ordered the police to complete its investigations in two weeks, while the sureties were also to submit two passport-sized pictures each to the court registry.

On Friday, April 16, 2021, Ofori reported that Bahala had smashed the windscreen of his vehicle with registration number, AS 2000 – X.
Obeng and Abbey, who were private security personnel attached to the Nkroranman Rural Bank, allegedly assaulted Bahala before sending him to the police.
According to the police, at the station, Bahala was violent, which compelled them to move him to the compound of their rented quarters where they handcuffed him on a tree.

The following day, the police realised that Bahala had become weak, and when he was rushed to the Seikwa Health Centre, he was pronounced dead on arrival.

With the assistance of some people from Seikwa, the police officers allegedly buried Bahala, but when rumours went round the community about the incident, they exhumed the body and deposited it at a private mortuary at Mantukwa, near Sunyani.
Arguments
Making his submission for bail, counsel for Obeng, Abbey and Ofori, Mr Addai Akwaboah, argued that the facts, as presented by the police, were inaccurate since the three accused persons knew nothing about the death of Bahala.

He stated that the three only arrested Bahala after he had smashed the windscreen of the vehicle and sent him to the police, explaining that “Bahala was healthy and even the police found it difficult to control him to the extent that he had to be handcuffed”.

Mr Akwaboah stated that his clients only heard the following day that Bahala had passed on, adding that whatever happened to him could only be explained by the police.
Counsel for the three police officers, Mr Alex Amponsah, however, argued that his clients played their legal roles as police officers, and that it was unfortunate that Bahala died through no fault of theirs.

“Their conduct was only to restrain the suspect from escaping from lawful custody,” he stated, adding that although they had been charged with conspiracy to murder and murder, “no offence has been categorised as non-bailable”.

He argued that since they were accused persons, their continued detention would be against their fundamental human rights if they were proven to be innocent at the end of the case.

However, a State Attorney, Mr Michael Baafi, opposed the bail applications and arguments by counsels for the accused, and submitted that since investigations had not been completed, it would be premature to grant bail to the accused persons.