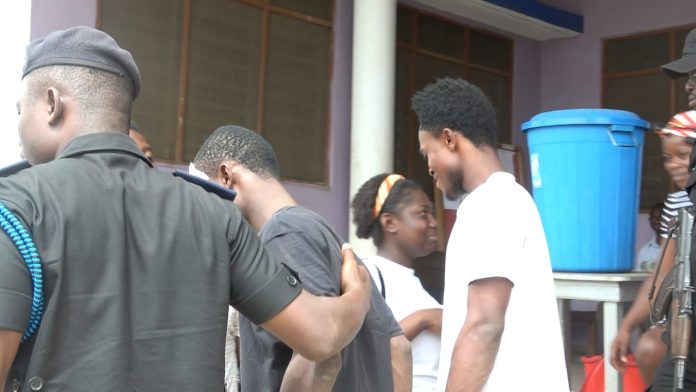 Two suspects arrested in connection with the murder of a city guard with the Kumasi Metropolitan Assembly have been remanded into police custody by the Asokwa Magistrate Court.

The suspects; Kingsley Amoah, a driver and Festus Adu Gyamfi, a driver’s mate have been charged with murder and abetment of crime, respectively.

50-year-old Thomas Yankey died from stab wounds in the chest during a confrontation between the suspects at the Kejetia Market over the weekend.

Appearing before the court on Wednesday, police prosecutor Chief Superintendent Kofi Blagodzi prayed the court to remand the suspects into custody to assist investigations.

The court presided over by H/H Afia Densi Asare-Kyire granted the request after a push for bail by Counsel for the accused persons was shot down.

Police prosecutor Chief Superintendent Kofi Blagodzi said the Ashanti Regional Police Command is concerned with the increasing spate of such cases and would work tirelessly to protect life and property.

“This is the first case that has come before the police, and because we do not want to breach the constitutional mandatory hours, the 48 hours, we want to put the accused persons before the court for them to be officially remanded as investigations continue. One was charged with abetment of murder and the other with murder. The police are working hard in the Ashanti Region to avert such cases. We will plead with the youth and drivers to be calm.”

Help rebuild our public finances and economy – Akufo-Addo to TUC