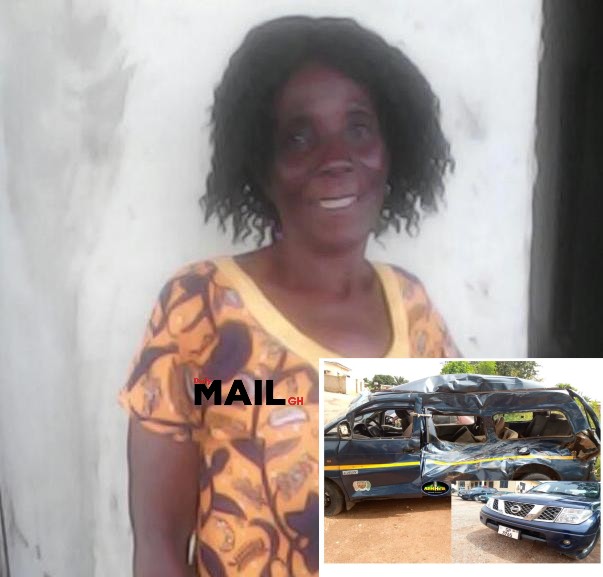 A 65-year-old woman has died after a commercial vehicle she boarded run into a truck after its driver was given a hot chase by the police for failing to wear a nose mask.

The incident occurred at about 3pm on Tuesday, May 19, on the Kenyasi/Abirem road in the Kwabre East District of the Ashanti Region while the patrol team was enforcing Covid-19 directives including a mandatory wearing of nose masks.

The deceased has been named as Abrefi Fremah. According to reports, the driver was ordered by the police to put on his mask. But in an attempt to outrun the police, the driver reportedly lost control of his steering wheel and rammed into a stationary truck on the shoulder of the road.

The survivors were taken to the Kenyasi Health Center for treatment. Fremah was referred to the Manhyia Government Hospital by the police patrol team after she reportedly fell unconscious.

“My mother felt unconscious after suffering neck injuries,” the deceased’s third son, Alfred Addai told Dailymailgh.com, adding that: “She was confirmed dead by medics when we arrived at the Manhyia Government Hospital.”

Addai further narrated that the bereaved family were yet to be contacted by the police after “they issued a report for us to deposit the body at the Komfo Anokye Teaching Hospital morgue.”

Dailymailgh.com also gathered that the driver of the vehicle with registration number AS 3792-19 had also been arrested, but was receiving treatment at the Kenyasi Health Center under police guard.

The vehicle had also been impounded at the Kenyasi Police Station when Dailymailgh.com visited. The deceased was on her way to the Komfo Anokye Teaching Hospital to see a relative until she met her untimely death.

Officers at the Kenyasi Police Station declined to comment on the matter.

Authorities in Ghana have begun enforcement of the mandatory wearing of masks as a measure to contain the spread of Covid-19.

Ashanti Regional Minister, Simon Osei Mensah, had for instance,  stressed that the Regional Security Council will continue to direct security personnel in the region to instantly punish persons who move about in public places without nose masks until all persons in the region comply with the directive.

Since Saturday, police in the region have been punishing persons without nose masks by making them engage in community service.

The Eco: The devil is in the detail

CARTOON: Save our data protest