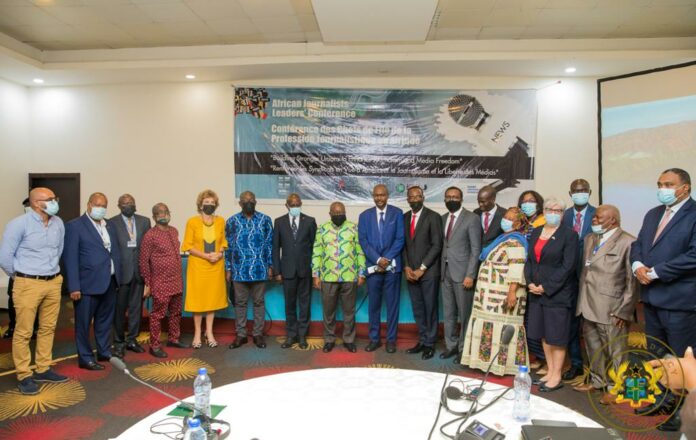 The President of the Republic, Nana Addo Dankwa Akufo-Addo, says critiques preferred by citizens and officialdom on the work done undertaking by the media can in no way be described as “an attack on media freedom”.

Speaking at the African Journalists’ Leaders Conference on Tuesday, 1st June 2021, at the President Akufo-Addo indicated when journalists are physically attacked or prevented from doing their work, no matter where in the world it takes place, that is an attack on media freedom, and must be roundly condemned by all.

He continued, “Having the freedom to criticise and oppose should also mean that the media is ready to accept and work with criticisms of its work by the citizenry or officialdom. That, for me, is one of the surest ways of improving the public discourse of our respective countries, and we should all strive towards realising this.”

The President also urged the Journalists’ Leaders Conference to use the event to address the phenomena of misinformation campaigns and fake news, which, sometimes, unfortunately, are propagated by some in the media.

“The tendency to report on only one side of a story, and pass judgment on it, without wanting to learn or give a fair amount of reportage to the other side, stifles the truth. The media should only be concerned about reporting the facts, and should not lend themselves to being bought or being used to destroy the reputations of others,” he added.

With the media possessing immeasurable power, the President appealed to them to ensure that they do not sacrifice the integrity and the future of society on the altar of an instant scoop or ill-considered publication.

The Rwanda genocide in 1994, he said, presents probably the best example of the calamity that can befall a country when the media is oblivious of, or chooses to ignore this particular sacred role.
“In Rwanda, a radio station became a catalyst for fuelling the genocidal atrocities in which eight hundred thousand (800,000) people were, tragically, slaughtered. Although the country has picked itself up under the strong leadership of President Paul Kagame, there is no doubt that many Rwandans continue to suffer from the trauma,” he added.

African journalists and media organisations, the President stressed, must not, and cannot take the national cohesion of their countries and their stability for granted.

“As was proven in Rwanda, all it takes is for a radio station to broadcast a few provocative and ethnocentric catch-phrases to alter completely the course of a nation’s history,” he noted.

President Akufo-Addo assured the Conference of his commitment to empowering the citizen, media and civil society, so all can play their part in realising the vision of building a progressive and prosperous Ghana.

“As President of Ghana, I assure you that the Ghanaian people will continue to exercise their right to free expression to the very end, because of their determination to build a free, open society with accountable governance, no matter the cost,” he added.