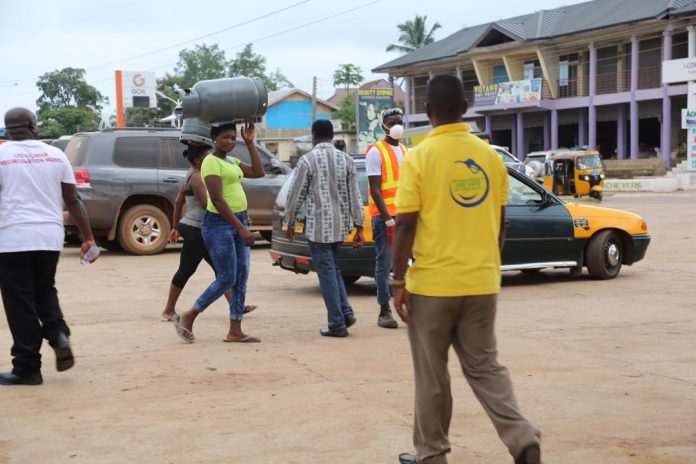 Several consumers of auto gas and cooking gas cylinders in Obuasi and its environs were seen violating all the safety norms associated with the Liquefied Petroleum Gas (LPG) cylinder usage.

Cooking gas cylinders were spotted being transported in a horizontal manner after refill while auto gas cylinders had fabrications with electrical wires around it and were also rusty which needed a coat of paint to prevent corrosion.

The observations were made when members of the National LPG Policy Implementation Committee of the National Petroleum Authority (NPA) paid a familiarisation visit to LPG outlets in the Ashanti Region town of Obuasi and its environs.

The visit was to touch base with Chiefs and opinion leaders of the Adansi Traditional Council on the planned piloting of Cylinder Recirculation Model (CRM) in Obuasi.

Addressing the media, the Chief Executive of NPA, Hassan Tampuli who led the team said, the cylinder when placed horizontally would release liquid from the filled cylinder which could cause explosion when in contact with any source of fire.

“If LPG is not stored or used correctly, can be extremely dangerous. A single mistake in mishandling LPG cylinders can be fatal, so be careful! You can be roasted alive” he stressed.

That not said, Mr. Tampuli posited the implementation of the CRM by the government will ensure public safety, adding that “there has been the need for the introduction of the policy owing to the dangers the existing policy exposes the people to.

“We want to be able to deliver a model that suits our modern agenda, an arrangement that will be enduring to allay the fears of the challenges we have had in the past and are seeing now,” the NPA CEO said.

Under the CRM, the LPG bottling plants will procure, brand, maintain and fill empty gas cylinders to be distributed to consumers and households through retail outlets which means all defects on cylinders would be corrected before reuse.

In a related development, the LPG Implementation Committee met with the Adansi Traditional Council to discuss the CRM pilot initiative which is expected to be implemented in October 2019.

At the briefing, the Chief Executive of NPA said the main reason for the policy initiative was to essentially deal with health, safety, and security issues.

Responding to a question on why the choice of Obuasi, Mr Tampuli said it was as a result of good control and traceability of cylinders, active refilling outlets with consistent LPG sales over the last six months and multiplicity of LPG Marketing Companies (LPGMCs).

The Queen Mother of Adansi Traditional Council, Nana Amoanimaa II commended the NPA for the choice of Obuasi for its pilot programme.

Also present at the meeting were Mr. Kwaku Agyemang Duah; Chief Executive of Association of Oil Marketing Companies (AOMC), Mr Johnny Blagogee; Board Chairman of AOMC, the Chamber of Bulk Distributors and the Ministry of Energy.