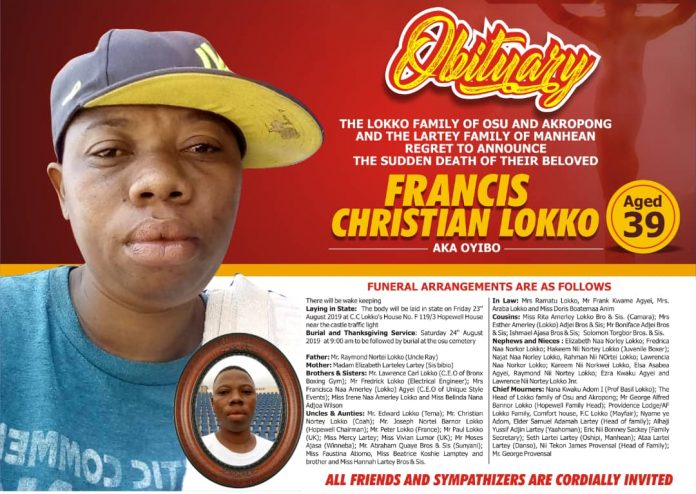 Date and Venue for the funeral rites of the late amateur boxing referee Francis Lokko has been revealed after a meeting held by his family.

Lokko died on Sunday 21st July 2019 at his residence at Osu in Accra after complaining of a little illness.

Referee Lokko who was part of the officials for the Bukom Fist of Fury which was held on the streets of Osu on Saturday 20th July could not partake in the officiating after he complained of a severe headache during the weighing of the participating boxers earlier on in the day.

Speaking to Dailymailgh.com , Carl Lokko, brother of the deceased confirmed the date and venue for the burial services for the late Francis Lokko after a meeting was held by the family and relatives.

According to Lokko, the family will pay it last respect to their beloved Lokko in James Town, Sempe and there will be wake keeping on Friday 23rd August 2019 at the family house (osu), C. C. LOKKO, HopeWell House near the Castle traffic lights.

“There will also be a church service on Saturday 24th August 2019 also at the family house by the Wesley Methodist Church and will be sent to the Osu Cemetery to be buried”,said Lokko.

In an interview with the Head of family, Prof Basil Lokko revealed that the late amateur boxing referee had no wife and children and attended New Dawn Preparatory school for his primary education and continued at the Abokobi Presby JSS School before completing his secondary education at Osu Salem Secondary School.

All boxing loving fans, stakeholders of various sports organisations and the general public are cordially invited as the Lokko family mourn their beloved Francis Lokko (the late).