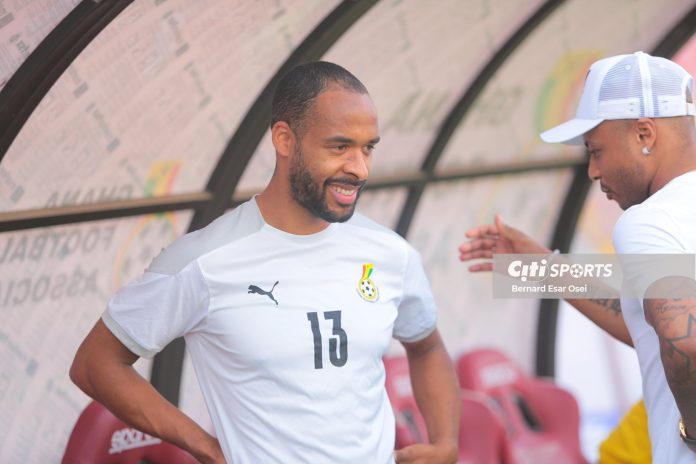 Belgium-based Ghana defender, Dennis Odoi showed why there’s a saying, ‘Old Wine Taste Better’ as he produced a wonderful performance in his debut on Friday against Nigeria.

The experienced defender pocketed all the wingers of the Super Eagles of Nigeria in the 2022 World Cup playoff at the Baba Yara Sports Stadium in Kumasi.

He played his first game for Ghana and proved why coach Otto Addo handed him a Black Stars call-up for Nigeria clash for a place in Qatar.

The 33-year-old former English Premier League Fulham FC captain was one of the best players who donned the Ghana colours against the Super Green Eagles.

He played the entire duration of the match and didn’t panic on the ball for just once but rather gave a very good account for himself with a beautiful cool play at the back.

The Belgium Jupiler Pro League giant, Club Brügge defender brought stability at the back as he solidified the right side of defense to nullify Nigeria’s threat.

He was one of the three best performed players in Ghana’s crucial World Cup playoffs first leg qualifier at home on Friday before Tuesday’s clash in Abuja.

He ccould become a permanent force at defense for Ghana in at least two to four years to come.

He sshowed his mettle in the game to justify the saying, ‘Old Wine Taste Better’ with a youthful display despite his age.