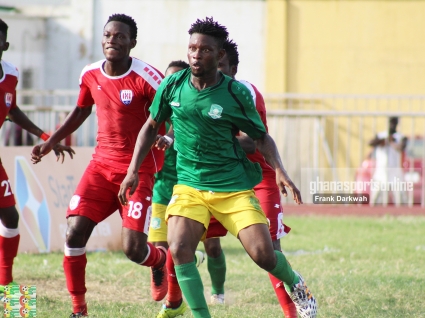 The Yellow and Mauves officially announced the capture of former Aduana Stars hit man Sasraku on a two-and-half year contract.

The 25-year-old bulky attacker was on Ghana League giants Kumasi Asante Kotoko and Accra Hearts of Oak before swerving both clubs to join the league leaders.

Sasraku, who joined Tunisian side Club African from Aduana Stars in 2018 has been without a club since the end of 2018-19 season after leaving the Tunisian outfit.

Medeama in their quest to annex the Ghana Premier League for the first time in the club’s history has added the goal poacher to their ranks to help push them to a step further to lifting the covetous trophy.