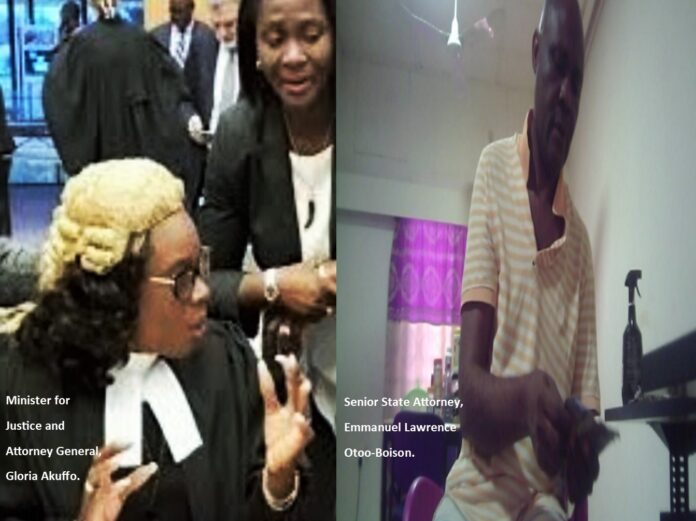 The committee constituted by the Legal Service Board (LSB) at the request of the Ministry of Justice and Attorney-General’s Department to probe the senior state attorney implicated in the EIB Network’s investigative documentary film dubbed “Cash for Justice” has completed and submitted its report, high-level sources at the law ministry have revealed.

The Minister for Justice and Attorney General, Gloria Akuffo, interdicted the state’s attorney, Emmanuel Lawrence Otoo-Boison, a few days after the documentary film was aired and published by the EIB Network and some other media houses in Ghana in October, 2019.

The committee, chaired by a veteran Supreme Court judge, His Lordship Justice Jones Dotse, further conducted a 3-month-long investigation into the exposé between January and April, 2020, with the interdicted senior state attorney and his lawyer, Edward Oppong as well as the producer of the investigative film (Edward Adeti) and the undercover agent engaged for the undercover mission (name withheld) in attendance.

The public has been very upset with the ministry as it has taken “so long” in releasing the report since the interdiction of the state’s attorney, who was involved in the clear incriminating evidence, was announced about a year ago.

Famous security specialist, Adam Bonaa, also issued a warning, when he spoke to the press this year on the exposé, that further delay on the part of the ministry in releasing the Justice Dotse Committee’s report could trigger avoidable tension in the Upper East Region where several angry residents, who say they have suffered injustices at the Attorney-General’s Department through “the questionable actions” of Otoo-Boison, suspect the ministry’s delay in making the verdict known is a covert attempt to shield its own.

One of the numerous angry residents is an ex-soldier, Raymond Ayua, whose child was killed in a knife attack in the Bongo District and became even more frustrated as the person who killed his son broke jail and looked a happy freeman in front of the bereaved relatives who kept appearing in court for years until they gathered that the court was not going to help them get justice with “a disappointing” Otoo-Boison in charge of the case as a state’s attorney.

The elderly Mr Ayua, a native of Bongo but resident in Accra, is visibly reeling under a chronic trauma today not just because of the pain his son suffered before he died from the knife wounds but also because he had invested so much in the brilliant boy and had prepared him to ‘succeed’ him in the Ghana Armed Forces. His son had just undergone a medical screening for military enlistment and was awaiting a favourable call when he was killed. His intestines were gouged out by a knife-bearing young man described in the district as notoriously wayward.

Background to the investigation

State’s attorneys, as lawyers representing the interests of the state in legal proceedings, are expected to prosecute accused persons without bribe and bias.

A public outcry broke out against the office of the Attorney-General’s Department in the Upper East Region with accusations that some criminal elements at the law office were perverting the course of justice by extorting cash from crime suspects and taking bribes from accused persons to free them from prosecution and punishment.

As the outcry waxed louder, the region became plagued with frequent lynching incidents as frustrated residents, having lost confidence in the law office, resorted to getting justice their own way by instantly killing anyone suspected to have committed a crime. The more the angry public levelled its accusations against the Attorney-General’s Department in the region, the more the office fought back, asking the public to produce evidence to prove the allegations which generally were directed at Otto-Boison.

A one-time Bolgatanga Divisional Police Commander, Chief/Sup. Samuel Tibil Punobyin, came under pressure when he complained openly that Otoo-Boison was frustrating genuine police officers by taking money from crime suspects and skewing his advice on the dockets in a way that would hand the accused persons an acquittal from punishment and a boost to commit more crimes against society. Contrary to the bold stance Chief/Sup. Punobyin took, the Upper East Regional Police Commander, DCOP Osei Ampofo-Duku, backed the Attorney-General’s Department in the region, rubbishing the public allegations as “perception” in an interview with the EIB Network.

The Upper East Regional Chief State Attorney, George Y.F. Kpodo, wrote a letter with a scathing tone to Chief/Sup. Punobyin, demanding a retraction and an apology from him within two weeks for criticising his second-in-command, Otoo-Boison, without evidence. Kpodo threatened legal action if the two-week ultimatum elapsed without the demanded retraction and apology being met. The under-pressure commander did not have proof that Otoo-Boison was taking inducements to free accused persons but he was confident about his claims just as the frustrated residents were sure of their accusations against Otoo-Boison but could not provide evidence. Chief/Sup. Punobyin refused to bow to the mounting pressure.

As the threatened legal action loomed, the Inspector General of Police (IGP), James Oppong-Boanuh, also received petitions filed by a syndicate against Chief/Sup. Punobyin in favour of Otoo-Boison. The petitions, said to have also been backed by some police officers superior to Chief/Sup. Punobyin in the region, sought to portray him to the IGP as not only guilty of “undignified conduct” but also deserving of some penalties including demotion for finding fault with the senior state attorney.

Meanwhile, an EIB-Network investigation into the public outcry against the Attorney-General’s Department in the region had captured Otoo-Boison on undercover tapes taking cash from a supposed relative of an accused person, Mohammed Awal, and giving an assurance to set him free from prosecution.

Otoo-Boison was prosecuting Mohammed Awal at the High Court in Bolgatanga for alleged rape. Whilst standing trial for rape, Awal was also on the INTERPOL list for some serious offences he reportedly had also committed in Burkina Faso.

Otoo-Boison was captured in both raw footage and in the video documentary film dubbed “Cash for Justice” strongly advising the accused person to go into hiding from the INTERPOL as soon as the court granted him bail. He is also seen and heard on the undercover tape demanding a pregnant goat and 1,350 British pounds sterling from the family of the accused person (Mohammed Awal). Otoo-Boison said he needed the 1,350 British pounds sterling to purchase an air ticket to London where he claimed the government had given him a programme to study and had asked him to raise his airfare to the United Kingdom by himself.

An interdicted Otoo-Boison suggested to the Justice Dotse Committee that Chief/Sup. Punobyin, who, like the public, was unaware the EIB Network was carrying out such a highly classified undercover mission, had a hand in the exposé. But Justice Dotse dismissed his claim, making it clear to him that the most important thing was to pass the integrity test as a public officer during the undercover investigation regardless of somebody having a hand in the exposé or not.

Sources inside the police service say criminals are compelled to relocate from the Upper East Region following the airing of the “Cash for Justice” documentary film and the interdiction of Otoo-Boison as they reckon that it would henceforth be difficult “to buy justice with cash” when crime is committed. Sources also say the Attorney-General’s Department in the region, in the aftermath of Otoo-Boison’s interdiction, now advises on dockets with quick efficiency and sends out dockets without delay for prosecution.

The Coalition for Equal Rights and Justice (CERAJ) recently announced plans to file a petition to the Mediation and Security Council (MSC) of the Economic Community of West African States (ECOWAS) against Otoo-Boison for advising a crime suspect on the INTERPOL list to go into hiding against the security protocol of the sub-region.

The “Cash for Justice” documentary film corroborated the public claims against Otoo-Boison, it silenced the vociferous letter written by the office of the Attorney-General’s Department in the region demanding a retraction and an apology from the police commander, and it vindicated the long-tormented police commander, Chief/Sup. Punobyin, who is now in the Western Region on transfer.