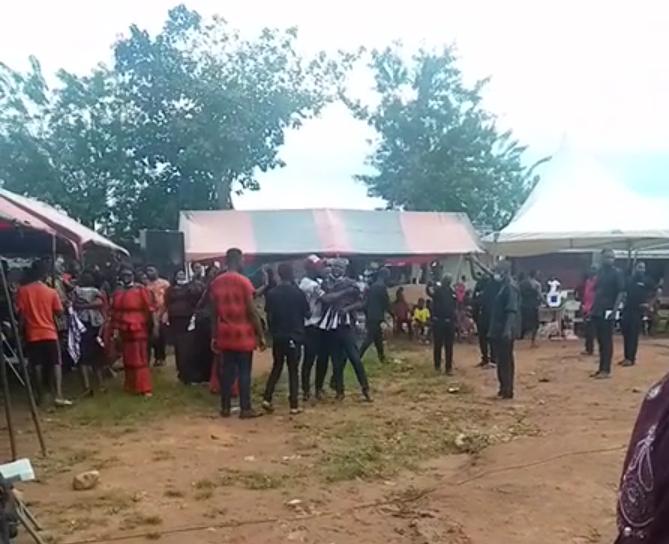 A district court at Koforidua in the Eastern Region has remanded into police custody, Samuel Kofi Adjei, the man who reportedly inflicting machete wounds on Bernard Kwasi Amoani, a New Patriotic Party (NPP) Communicator in the Lower West Akyem Constituency.

Popularly known as Jamalo, Samuel, was rearrested when he reported himself to the Suhum police on Wednesday in the company of a party executive.

He was later transferred to the CID Regional Headquarters on Thursday morning and subsequently arraigned before the Cocoase Magistrate Court presided over by His Lordship Eric Denin.

Samuel Kofi Agyei, driver of the MP for Suhum, has been charged with causing harm with an offensive weapon contrary to section 70 of the Criminal Offences Act, 1960 (Act 29) was denied bail despite a plea by his lawyers.

A Chief State Attorney argued that the nature of the offence is severe, hence there is a possibility the accused when granted bail will not appear to stand trial.

His Lordship Eric Denin, who asked both counsels to approach the bench briefly, later adjourned the case to Tuesday, 7th September 2021, for the ruling on the bail application.

A funeral ceremony held on Saturday, August 28, in the Suhum Constituency of the Eastern Region turned bloody, when Bernard Kwasi Amoani was knifed by Jamalo, when a misunderstanding broke out on a funeral ground.

Footages show a free-for-all brawl at the event as mourners leap for safety, bringing the event to an immediate end.

The cause of the brawl is yet to be ascertained by the police but could be politically motivated.

“The Suhum Police Command is investigating a case of causing harm that ensued yesterday, Saturday, August 28, 2021, around 5pm.”

“Whiles the members of the NPP in the Suhum constituency were mourning a colleague at the Suhum Council, a misunderstanding ensued between some party communicators and the followers of the MP, and in the process one Jamal inflicted a deep knife wound on the head of the victim, one Kwasi Amoani 51, and the matter was reported to the police and the complaint was subsequently taken to the Suhum Government Hospital where he is responding to treatment at the emergency ward.”

“He’s in a stable condition and another victim who suffered some bruises was treated and discharged”, DSP Tetteh had said in an earlier interview.