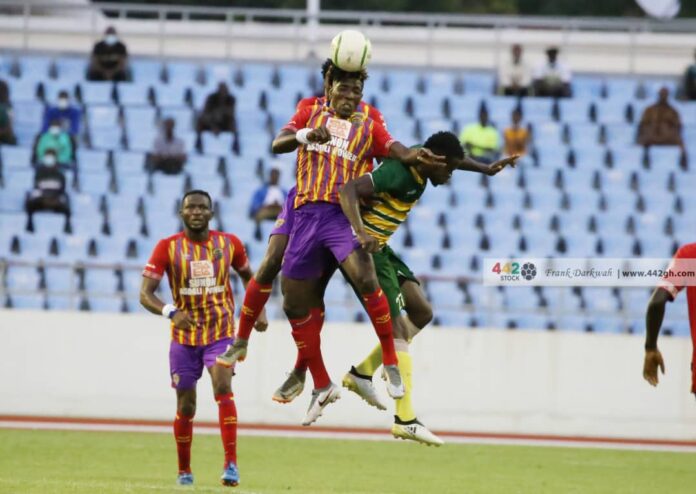 Ghana Premier League strugglers Ebusua Dwarfs put up a great show to draw 1-1 with Accra Hearts of Oak at the Cape Coast Stadium on Sunday, 4 July 2021.

Hearts of Oak created chances in the early stages of the match despite Dwarfs having most of the ball in the first 15 minutes of the encounter.

The Phobians could have taken the lead after Dwarfs early dominance but striker, Víctor Aidoo failed to make the most out of the chance as his colleague Benjamin Afutu Kortey was in a good position to score should he have passed the ball to him instead of shooting way over the crossbar.

Dennis Nkrumah Korsah gave the hosts the lead in the 85th minute with a sumptuous free-kick after substitute William Dankyi committed a foul just outside the box.

Hearts did not rest after going a goal down very late in the game as an injury time volley by striker Kwadwo Obeng Jnr earned the Rainbow Boys a valuable point to set them up for a first league title since 2009.

The Phobians are now one win away from ending their long wait for a trophy since 2009 and will next play against Liberty Professionals next week and could win the league with one-match to spare if they beat the Scientific Soccer Lads in Accra.

Ebusua Dwarfs transitional play was exceptional and gave the visitors a torrid time in defense but Mohammed Alhassan and his center-back partner, Caleb Amankwah were very resolute at the back to prevent any mayhem.

Twelve minutes into the game, Hearts of Oak hit the upright with a bullet header from Afutu following a corner kick.

The game was full of fireworks by both sides and nothing could separate them at the end of the match as it ended in a 1-1 stalemate.

Dwarfs will make a long trip to Techiman next weekend to play against fellow relegation threatened team Kumasi King Faisal FC at the Ohene Ameyaw Park.