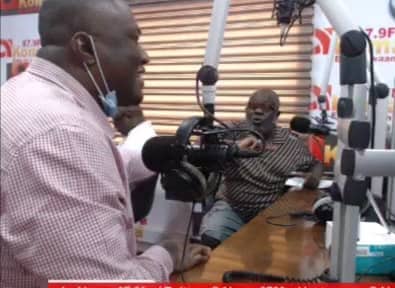 Governance, infrastructure, and corruption, among others, have been featured on radio programmes across Ghana as the West African nation heads to the polls in December.

But on the October 12 edition of Ghana Akoma, a popular weekday political programme on Kumasi-based Akoma FM, NPP MP for Effiduase/Asokore MP checkmated Yamoah Ponkoh, a communicator with the opposition NDC.

The show, which was billed to be a battle of ideas, facts and figures ended with Nana Ayew Afriyie, MP for Effiduase/Asokore making mince of the former Ejisu/Juaben Municipal Chief Executive of the erstwhile John Mahama administration.

Ponkoh, who chose to double down on a failed strategy of downplaying the ruling party’s achievements, bit more than he could chew after describing them as “lies”.

He further resorted to tangential arguments and sought to set his facts and interrogated them instead of responding directly to evidence presented in Kumasi during a visit by the Vice President, Dr. Mahamud Bawumia.

With the young Medical Doctor holding him in check, Yamoah Ponkor at a point seemed frustrated and almost lost his temper and the programme had to come to an unplanned end.

Remain at post – Akufo-Addo directs MMDCEs as he dissolves statutory...