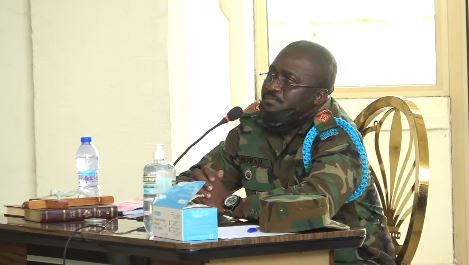 The Ghana Army has clarified that the soldier who knelt and aimed his gun at protesting youth at Ejura in the Ashanti Region, did not discharge live rounds directly at the protestors.

This was made known when the Commanding Officer for the 4th Infantry Battalion, Lt. Col. Kwesi Ware Peprah, appeared before the three-member committee tasked to investigate the circumstances surrounding the incident that occured on June 29.

According to him, the soldier only knelt and aimed the gun as a way of scaring the protestors.

He said such a posture is acceptable as part of the standard operating procedure the security agencies use in tackling protests such as the one that occurred in Ejura.

While admitting that kneeling is an indication of aiming to fire, he noted that none of the soldiers who knelt fired directly at the protestors.

Lt. Col. Kwesi Ware Peprah told the committee on Wednesday that the soldiers as expected of them, gave verbal warnings and fired warning shots, but did not intend to shoot to kill any of the protestors.

“The first is a verbal warning, the second is to cock your weapons, to signal to the crowd that you are about to fire, the third is to fire warning shots, but the signal to scare them includes the kneeling, to aim. As a matter of fact, the direction of the man [soldier] who knelt was such that no casualty came from that side. He didn’t fire. He fired only warning shots, but when he went down, he didn’t fire,” he told the committee.

Two people were killed in the protest last week, with the visibly armed soldiers invited to the scene being held responsible by local residents, but the military commander said the soldiers did not aim to shoot to kill.

He described the deaths as unfortunate and suggested that the deceased persons could have also been hit by shots fired from some protestors.

Four others were injured, and one of them, a sixteen-year-old boy, has had one of his legs amputated.

“As a matter of fact, I even suspect that the weapon that fired from protestors might have hit one of them,” he said.

The violence occurred during protests that followed the death of Ibrahim Muhammed.

Ibrahim Muhammed, alias Kaaka, died after he was attacked by a mob on June 27 while returning home.

He’s believed to have been killed because he was critical of the government.

The 45-year-old was noted to be vocal on both local and national issues using his Facebook page.

Police in the Ashanti Region have since arrested three persons in connection with his death and put them before the court.

Ibrahim Muhammed was buried on Tuesday, June 29, 2021, alongside the two others who died in the protest.

A look at how The Post evolved with technology to contribute...