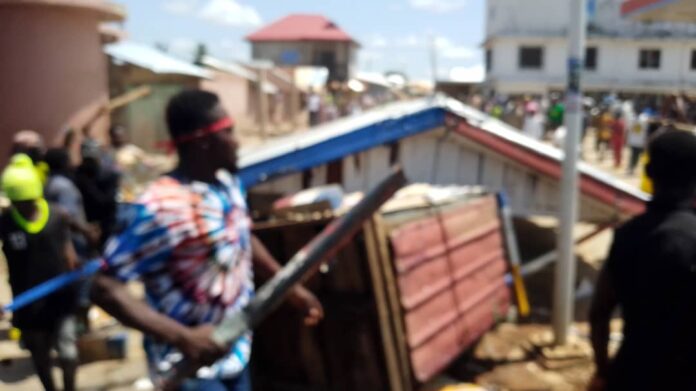 Two people have died while four others were wounded when a police and military contingent clashed with angry protesters at Ejura, about two hour drive from the Ashanti Regional capital Kumasi, Tuesday.

They were part of angry youth who had launched a campaign to get justice for a 45-year-old social activist, Ibrahim Kaaka Mohammed who was killed by unknown assailants on Saturday, June 26.

The angry youth had unleashed an attack on police who were spotted meters away from a burial service held for the late member of the #FixTheCountry movement.

Protesters however pelted stones at a police meters away from the cemetery forcing the team to withdraw.

Correspondent Jonathan Ofori reports that a reinforcement was called to disperse the crowd who had taken over the streets destroying properties.

Jonathan said: “You could see armed soldiers shooting into the air and in the crowd putting lives in jeopardy. Scores carried wounded people to the Ejura Government Hospital for treatment.

“Two died instantly. One died before arrival and we were resuscitating the other one when he also died”, said Dr Manyee in a tensed emergency room as other medics race with time to rescue the perishing.

Relatives had also thronged the health facility to identify their relatives. It still remains unclear whether an arrest has been made in this latest incident.

There is relative calm in the Ejura township. It is gathered that the two people would be buried today [Tuesday] according to Islamic teachings.