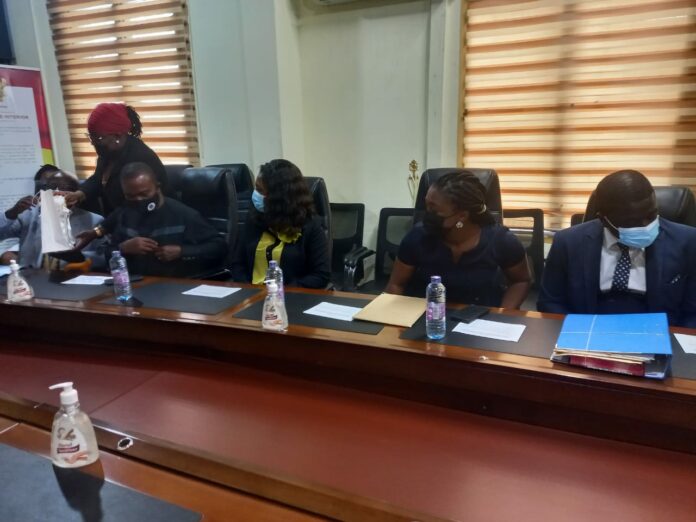 The three-member ministerial committee tasked to investigate the disturbances recorded at Ejura in the Ashanti Region on Tuesday, June 29, 2021, has presented its findings to the Interior Minister, Ambrose Dery.

The presentation was done at the conference room of the Interior Ministry on Tuesday, July 27, 2021.

“I want to let you know that we attached serious importance to the work and dedicated ourselves to all issues with meticulous attention and details. Having assured ourselves after listening to 22 witnesses and reviewed volumes of documents including audio and videos, we have come with our findings and proffered some recommendations. And we hope the government through your good self [Interior Minister] will give a good ear to them and try to accept and implement them,” Chairman of the Committee, Justice George Kingsley Koomson said during the presentation of the report.

The committee completed its work on July 9, 2021, after holding public hearings for two weeks.

The Committee took testimonies from 22 witnesses including journalists, police and military officers as well as political appointees in the jurisdiction of the incident and family members of some victims.

Why the committee was set up?

The President, Nana Akufo-Addo, earlier in July 2021, directed the Interior Ministry to conduct a public inquiry following the killing of two people and the injuring of four others by soldiers during a protest against the killing of a social activist, Ibrahim Muhammed, popularly known as Kaaka Macho.

Kaaka died on Monday, June 28, 2021, after he was attacked by unknown assailants while returning home from an event he attended in the area.

Earlier reports suggested that Kaaka was killed because of his social activism, which some persons felt was making the government unpopular, but police reports suggest otherwise after three people including his brother were arrested and put before the court over the killing.

Other members of the committee were Dr. Vladimir Antwi Danso and Juliet Amoah.

Marie Louis Simmons, a Principal State Attorney, was the secretary to the committee.