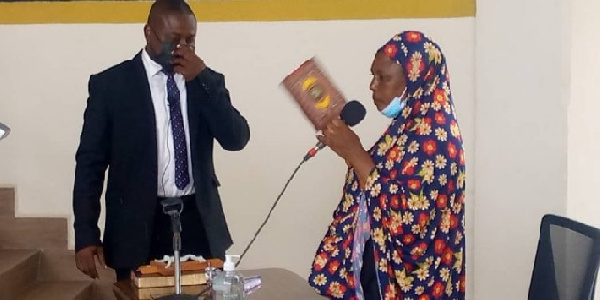 A woman whose 16-year-old son sustained gunshot wounds during the recent disturbances at Ejura in the Ashanti Region has been recounting how doctors at the Komfo Anokye Teaching Hospital (KATH) exhausted all options to prevent her son’s leg from being amputated.

According to Madam Salamatu Mohammed, her son Mohammed Awal Misbawu, had gone to buy food after he complained of hunger when the unfortunate incident happened.

Madam Salamatu Mohammed made this known on Tuesday, July 13, 2021, when he appeared before the three-member committee investigating the circumstances of the incident.

“My son told me he was going to buy the food, and he saw some military men coming and suddenly, he fell down and lost consciousness. He told me, he regained his consciousness at the hospital. The next day, the doctor told us that he has referred my son to Duayaw Nkwantah hospital. So they procured an ambulance, and he was taken there. When we got there around 4:00 pm, the doctor admitted us and requested us to pay GHS1,500 for an operation to be conducted on my son.”

“So my son was taken to the theatre, and he (doctor) observed my son and said he couldn’t continue, and that we should send him to the Komfo Anokye Teaching Hospital. My son was admitted and taken to the theatre. The doctor said he can’t do anything on the leg unless he amputates it. So as we speak, he is still at the hospital, and he has been amputated.”

She also disclosed that she didn’t know of the protest as of the time the son was going to town.She said if she knew about the protest outside, she wouldn’t have sent her son out.

“I didn’t know the situation in town; as at the time, he was going to buy the food. But all I can say is that he wasn’t part of the demonstration.”

News about the death of Ibrahim Muhammed, [also known as Kaaka] on Monday, June 28, 2021, at the Komfo Anokye Teaching Hospital sparked widespread outrage among residents of Ejura in the Ashanti Region.

He was attacked by unknown assailants when he was returning home on his motorbike on Sunday, June 26.

It is alleged that he was attacked and killed because of his social activism, which some felt was denting the image of the governing New Patriotic Party.

This is because the 45-year-old was noted to be vocal on both local and national issues using his Facebook page.His family said he had faced threats over his activism prior to the attack.

Following his burial, some residents of Ejura began a street protest but were confronted by armed police and military personnel, leading to the deaths of two persons who were said to have been shot by some soldiers.

The police claim the protestors had become rowdy and were pelting the security personnel with stones.The three member-committee was thus constituted to commence a public enquiry into the deaths and report to the Presidency.

Meanwhile, three suspects have been remanded into police custody for their alleged roles in the killing of Kaaka.