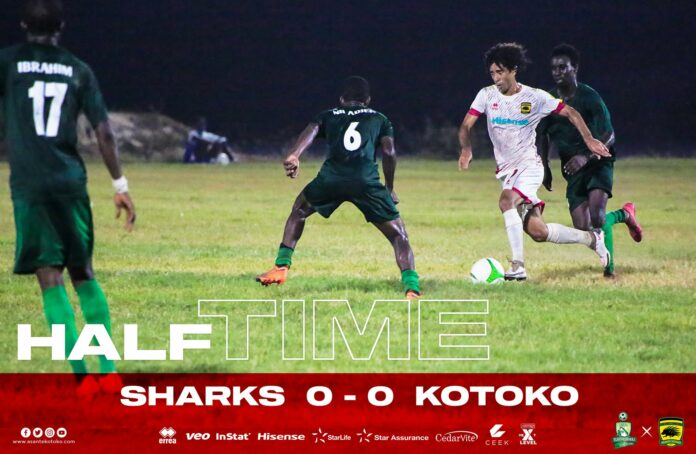 Former Ebusua Dwarfs striker, Alhaji Mustapha scored the only goal for Elmina Sharks FC as they inflicted the first defeat on the road on Kumasi Asante Kotoko SC on Friday night in Elmina.

The last game of the first round of the Ghana Premier League between the two teams was full of excitement and fireworks as Elmina Sharks FC becomes first team to defeat the Red and Whites on the road.

In the first 45 minutes of the match, the game was a fairly balanced one as both teams pushed for the first goal but it was the host who had many chances and were ignored three times by the center referee after penalty shouts.

Striker Kwame Opoku came close to scoring the opener after beating the goalkeeper but his effort was cleared off the line by the defense men of the Green and Whites.

In the second half, Alhaji Mustapha went past left-back Imoro Ibrahim before slotting home the only goal of the match to secure a vital home win over the Porcupines for Elmina Sharks who won their first game in seven matches to end their three matches losing streak in the game.

Asante Kotoko SC have two outstanding matches in the league due to their commitment in African Inter-clubs competition and would be hoping to bounce back from defeat against Kumasi King Faisal FC and Bechem United in those two matches before the second round of the league season commence.