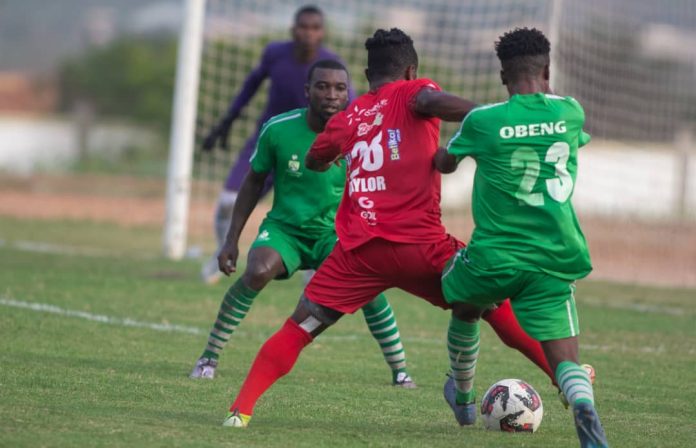 The whipping boys handed the Porcupine Warriors their second defeat 15 games this season in the Ghana Premier League with shacks winning their first game in 10 matches.

The last team on the table after 16 games secured a vital and a very important win to revive their chances of survival and did that to perfection with a 2-1 comeback win at home.

Winger Dickson Afoakwa scored the opening goal of the match to put the visitors 1-0 up after the 39th minute mark after tapping into empty net from close range after a great run and lay-off by Georges Mfegue.

Sharks equalized four minutes through former Skyy FC topsman Ebenezer Adukwaw grabbed his goal to make it 1-1 at the break.

The home team was awarded what seemed a controversial penalty which was earlier missed by Alhaji Mustapha.

The attacker got another chance to make amends after Kotoko goalie Ibrahim Danlad was adjudged to have come off his lines before the kick was taken – this time Mustapha slotted the ball into the back of the net to make it 2-1.