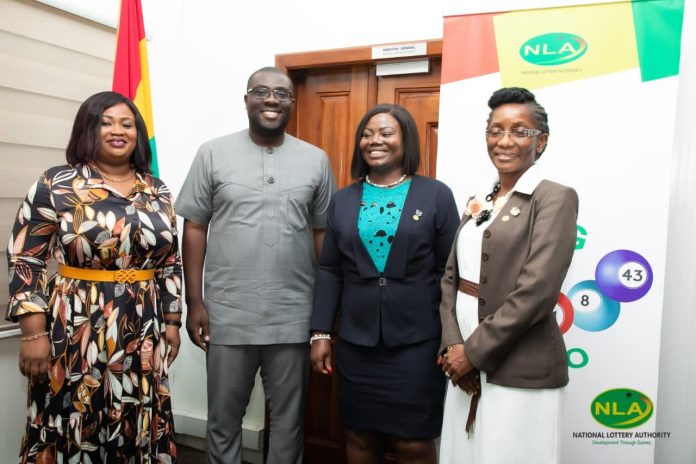 As part of efforts in ensuring that the public purse is protected, the Economic and Organised Crime Office (EOCO) in collaboration with the National Lottery Authority has come together to fight activities of fraudsters in the system.

Upon assumption of office, the current Director-General of the NLA Samuel Awuku waged a relentless war against fraudsters who under the guise of being employees of the company, have been defrauding innocent Ghanaians and the Authority while others operate without the requisite licenses.

This crusade has led to the arrest of several persons in various parts of the country who are currently being prosecuted in the law courts.
During a courtesy call on him by the Executive Secretary of EOCO COP Maame Yaa Tiwaa Addo-Danquah (Mrs), Mr. Samuel Awuku bemoaned the increasing number of fraudsters operating in the system robbing the state of huge resources and hailed EOCO’s readiness to help flash out these criminals operating within the space of the NLA

He disclosed that government through the NLA is losing millions of cedis due to the activities of these lotto fraudsters which directly and indirectly affect the image of the establishment reiterating that the NLA hopes to exceed its financial target, which will help drive the government’s developmental agenda in 2022.

“Government is losing several billions of cedis as a result of activities of these lotto fraudsters. We have waged a war and started arresting them but it is my hope that with your intervention we will remedy the situation and save a lot of cash for development”, he expressed optimism.
On her part, COP Maame Yaa Tiwaa Addo-Danquah (Mrs) hinted that the intelligence section of the Economic and Organised Crime Office (EOCO) with sophisticated technology will ensure that fraudsters within the system are not only flashed out but are dealt with within the precincts of the law

She assured the National Lottery Authority of her outfit’s resolve and support to the good courses of the Authority but was quick advice the authority to ensure it plays its role on the right path without any misappropriation.