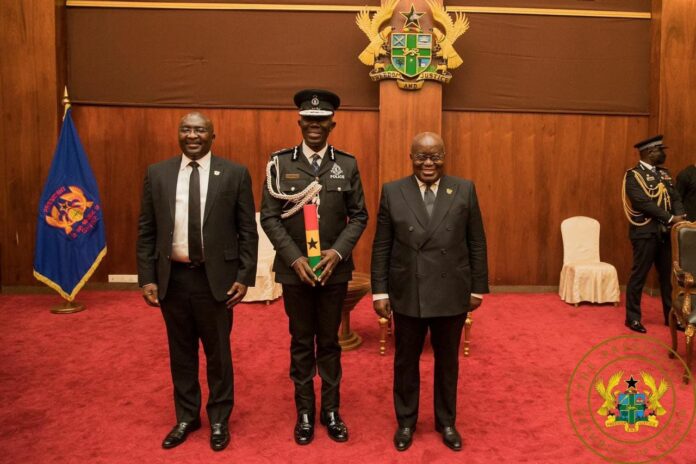 President Akufo-Addo has charged the 23rd Inspector General of Police (IGP) of the Republic, George Akuffo Dampare, to build a Police Service that would be able to maintain the trust of the Ghanaian people.

The President gave the IGP this charge after he administered the oaths of Allegiance, of Office and of Secrecy to the him at the banquet hall of the Jubilee House today the 7th of October 2021, at the first ever formal swearing in ceremony for an Inspector General of Police under the Akufo-Addo presidency.

President Akufo-Addo said the most important things for any nation is its peace, the safety of its people, and the preservation of its territorial integrity. A trusted police service the President noted is key to guarantee the ability of nation to enjoy same.

“It is often said that the public is the police, and the police is the public. The citizenry can only have confidence in the police service when its members are seen to be honest and enforce the law without fear or favour”.

“Your task as IGP during you term of office is to establish a service that maintains the trust of the citizenry. It is in everybody’s interest that the police service conducts itself as a principle, credible instrument of accomplishing the executive’s duty of maintain law and order in the state” President Akufo-Addo said.

Touch on the need for an independent and an a-political police service, President Akufo-Addo noted that “governments in our body polite have term limits”. According to the President, “in a multiparty democracy, parties win and lose power” and same “is good for the health of the nation that this should be so”.

“This is why the police service under your leadership (George Akuffo Dampare) should not tie its wellbeing or otherwise to the fortunes of the ruling party of the day. As president, and together with you as Inspector General of Police, we need to cooperate to ensure that the police service is left to focus on its core mandate and not to be an appendage of the ruling party” the President said.

Expressing his confidence in the new IGP, President Akufo-Addo, described his two months in office as the acting IGP as eventful and that he has left him with very little choice with regard to his confirmation as the IGP.

“I believe strongly that in you, we can help promote the development of the nation, governed by the rule of law and respect for human rights with the police being at the frontline of this endevour” Akufo-Addo stated.

The appointment of then Commissioner of Police George Akuffo Dampare, on the 21st of July 2021, as the acting Inspector General of Police (IGP) by President Akufo-Addo, to replace the immediate past IGP, James Oppong-Boanuh, was widely embraced by the Ghanaian populace.

The directive by the president has been described by a cross-section of Ghanaians as a good decision which will go a long way to improve the Ghana Police Service, considering the rich experience that Akuffo Dampare brings to his new office.

Social media platforms such as Facebook, Instagram and Twitter were awash with congratulatory messages directed at the then newly named acting IGP as members of the public wish him well in his new office.

In his acceptance speech, the IGP, George Akuffo Dampare, registered his appreciation to President Akufo-Addo and Vice President Mahamudu Bawumia, for the confidence reposed in him by nominating him and subsequently appointing him to the office of the Inspector General of Police.

He added that he will work together with the men and women of the service to make same a world class institution.

“Our vision is to become a world class police institution. Mr President, we are poised, we are focused to attain that. We know it is not going to be easy, but my colleagues and I have made up our mind that even if we are unable to take it to that destination, we at this time, will position the organization towards that destination such that there will be no turning back” the IGP, George Akuffo Dampare said.

Dr Dampare is the youngest acting IGP to be appointed in the Fourth Republic and the eighth youngest since Ghana gained independence. Prior to this appointment, he was the most senior police officer after the just retired IGP.

Dr. Dampare joined the Ghana Police Service (GPS) as a Constable in December, 1990 at age 20 and rose through the ranks to become Commissioner of Police (COP) 24 years later at age 44 in 2014, the rank he held until his appointment.

In 1991, on completion of his recruit training, Dr Dampare was adjudged the overall Best Recruit at the National Police Training School and won all awards except the award for the ‘Best Marksman’.

Again in 1996, he emerged the overall Best Cadet for the 32nd Cadet Officers’ Course at the Ghana Police Academy (formerly, Police College) and won all awards, including Excellence in Professional Police Subjects and Excellence in Academic Subjects.

The IGP signing the oath book
During his over thirty-year career as a police officer, Dr. Dampare has made significant contributions to policing in Ghana and beyond as enumerated below:

At the leadership and management level, Dampare has had the rare privilege of serving as the Head (Director-General) of almost every major department, giving him greater insight into the administration of policing in Ghana.

Between 2010 and 2015, under the leadership of two IGPs, Messrs. Paul Tawiah Quaye and Mohammed Ahmed Alhassan, Dampare led and coordinated the ‘National Anti-Armed Robbery Reward to Informant Initiative’, which saw the arrest and prosecution of many notorious armed robbers across the country.

As the Director-General for National Operations, Dr Dampare created an efficient system where fragmented units were consolidated to create effective and complete departments such as the establishment of an Anti-Armed Robbery Unit (the COMBAT Unit) to aggressively fight robbery and other violent crimes.

He also created the Intelligence Unit within the National Operations Department, which later informed the creation of a Police Intelligence Department at the national level.

As Accra Regional Police Commander, Dampare introduced an innovative and proactive policing strategy called the “Continuous Stakeholder Engagement Programme” where all stakeholders were included and involved in policing the Region. For the first time, through this initiative, the Ghana Police Service under his leadership, visited Political Parties in their offices to engage them.

As Director-General in charge of Welfare, Dr Dampare introduced an innovative social welfare scheme where he led officers from the Department to visit the homes of scores of sick and bedridden police officers across the country, and also introduced strategic medical interventions to facilitate their wellness.

Still at Welfare, Dampare initiated a process at Dodowa and Kasoa to reclaim lands owned and paid for by police officers. The matter had become a national security threat as many officers were angry at the failure of the leadership of the police administration to intervene in the situation which had lasted for close to a decade.

In 2013, under the leadership of the then Inspector-General of Police (IGP), Mohammed Ahmed Alhassan, Dr Dampare led a team of officers, working day and night, to restructure the Armoured Car Squadron (ACS) Unit into the Formed Police Unit (FPU) within a record time of ten (10) weeks.

This task had remained impossible for over fifteen years. The FPU has now become one of the police units undertaking internal police operations and international peacekeeping missions under the United Nations and African Union.

The IGP and his family in a picture with the President and Vice President after the swearing in ceremony
As the Director-General of the National Patrol Department (Police Visibility Department) and under the leadership of the then IGP, Mohammed Ahmed Alhassan, Dampare supervised the implementation of the novel “Police Visibility” programme which saw the presence of police personnel at most intersections and communities in Ghana.

Again, during the implementation of the vision of the then IGP, Mohammed Ahmed Alhassan, for the creation of the Police Service Command and Staff College at Winneba and the Police Service Public Safety Training School at Pwalugu, Dr Dampare was the leader of the technical teams that ensured the full operationalization of these two specialist training institutions.

As Coordinator of the National Inter-Ministerial Task Force for the 2007 Ghana Floods which was under the overall leadership of Dr Mrs. Mary Chinnery-Hesse (then Chief Advisor to H.E. President J.A. Kufuor), Dr. Dampare led a team, within a seven-month period, to develop and implement a National Disaster Management Model, which brought all United Nations Agencies, Red Cross and Civil Society organizations, among others, together, to successfully manage the disaster.

As Director-General for Finance, Dampare led a Police Technical Implementation Team to work with the Fair Wages and Salaries Commission, to migrate the Police Service onto the Single Spine Salary Structure as the first institution in the country to successfully complete the migration.

Still as Director-General for Finance, Dampare also introduced the payment of recruits’ allowances through the bank by getting them bank accounts as well as ATM cards. He also engaged the banks and got them to build ATMs at the Police Training Schools at no cost to the Government.

Under the visionary instructions of the then IGP, Paul Tawiah Quaye, Dampare also led a team to establish the Procurement Unit of the GPS and ensure full implementation of the Procurement Act. He introduced cost-saving measures in the repair of Service vehicles and the use of hotel accommodation, among others.

Dampare led a team of officers to use mostly donations from the private sector to give a facelift to the Police Headquarters by constructing a Public Affairs building, the Integrity Square, the Police Fitness and Social Centre and a Helipad. The CID Headquarters building was also refurbished under his leadership.
As Accra Regional Commander, Dampare raised sufficient capital from the private sector to complete a new office complex and re-roofed 90% of all office buildings at the Regional Headquarters which had been in a deplorable state for years.

During his policing career, Dr Dampare has undertaken numerous law enforcement courses at tactical, operational, strategic leadership and management levels, making him an all-round police officer with the required skills and competences commensurate with his rank.

Aside his policing, Dr Dampare previously worked as a Research Fellow and lecturer at King’s College London, University of London. He also lectured at the University of Cape-Coast (UCC), Ghana Institute of Management and Public Administration (GIMPA), Regent University College and the Data Link University College. He is also one of the pioneer lecturers at the Business School of the Kwame Nkrumah University of Science and Technology (KNUST), Kumasi.

Having passed the GCE Ordinary and Advanced level examinations as a private candidate in 1989 and 1992 respectively, Dr. Dampare proceeded to study accountancy and became a Chartered Accountant in 1996 at age 25.

Dr Dampare has also served and continues to serve on several boards including the Economic and Organized Crime Office (EOCO) Governing Board, Data Link University College Council, Police Central Disciplinary Board and the Pumpkins Foundation Board (a philanthropic organization for underprivileged children, including those with autism).