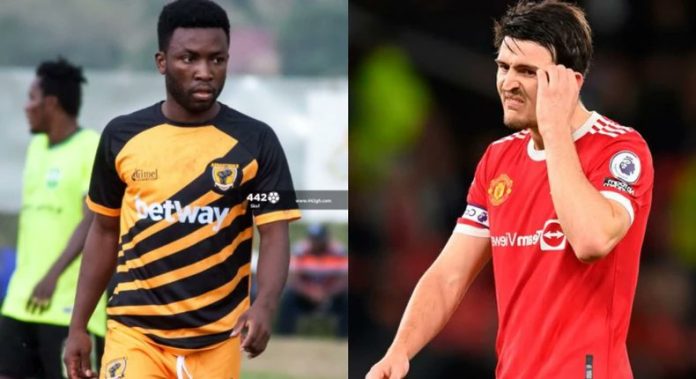 Obuasi AshantiGold SC winger Seth Osei says even Harry Maguire scores own goals and believes the goals scored during his side’s 7-0 victory against Inter Allies were all “competitive.”

The 22-year-old is one of several players who have been banned after it emerged that the said Ghana Premier League game was fixed.

However, reacting to the controversial goals that were scored during the game, Osei said even Manchester United captain Harry Maguire scores own goals.

“can confirm that we played a competitive game against Inter Allies in Obuasi. Hashmin Musah decided to score two own goals and for me, it happens in football. I don’t have any issue with that because Harry Maguire who is a top player has been scoring own goals” he told Kumasi-based Pure FM, as quoted by Adomonline.

Ashanti Gold recorded an emphatic 7-0 win over Allies at the Len Clay Stadium on the final day of the 2020/21 season.

Video highlights of the match sent shocking waves down the spines of fans after the away side’s Musah deliberately scored two own goals.

The defender was brought on in the second half with the scoreline at 5-0, and he put the ball in his own net twice to increase the tally to 7-0.

Musah later disclosed that he had picked up information that a 5-1 scoreline had been “pre-arranged” and bets placed to that effect.

In his defense, the player said he had to deliberately score those own goals to thwart the alleged match-fixing plan.

Osei, however, insists he is innocent of all allegations leveled against him by the Disciplinary Committee of the Ghana Football Association (GFA).

“I am innocent and I am not worried about this ban. I have no idea about this because I was not involved in this scandal and for me, this ban will not stand,” he said, as quoted by Myjoyonline.

“I never had communication with any player ahead of the game and that is my worry. This ban will not stand because I am innocent.”

Meet the Ghanaian woman who climbed Kilimanjaro for the safety of...