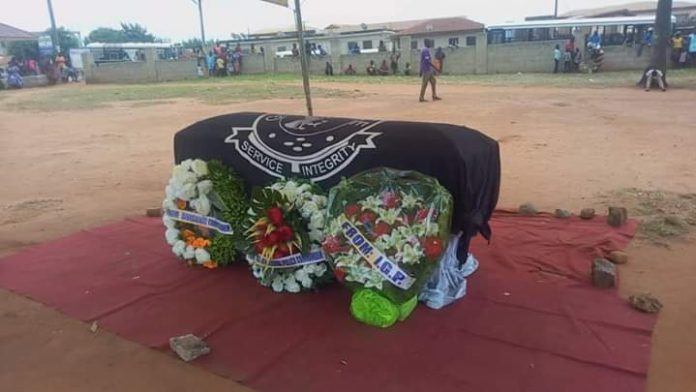 The family of a police officer, who was found dead at Akim-Swedru in the Eastern Region, buried their son on Tuesday and hope to find answers to their many questions about his death.

The body of Lance Corporal Alhassan Asare,  33, was found lifeless on Monday, August 19, 2019, at the top floor of Dukes Petrol Filling Station by his colleague who had gone to fill his car.

He was spotted on a plastic chair with his rifle in between his thighs with severe gunshot wounds in the head with his uniform soaked with blood.

Police in their preliminary investigations had described the incident as “unnatural death”.

His family however, said they are still struggling to understand the events leading to his death.

At a burial service held Tuesday brother of the deceased, Gabriel Obeng wants police to speed up with investigations.

“When I was invited to the morgue in Accra, I saw that my brother was murdered. He was shot at the back. Social media claims he committed suicide not accurate”, Gabriel told journalists amid tears.

The service was heavily attended by hundreds of family and sympathizers  including COP George Akuffo Dampare, who led a delegation to Mprefie, near Asante Mampong in the Ashanti Region.

Some sympathizers who could not hold back their tears, they were seen wailing uncontrollably as the lifeless body of the officer was being conveyed to the cemetery.

Born in 1986, the late Asare until his death was detailed to Akyem-Oda in the Eastern Region after passing out at the police training school in 2012.

He left behind a wife and two children.